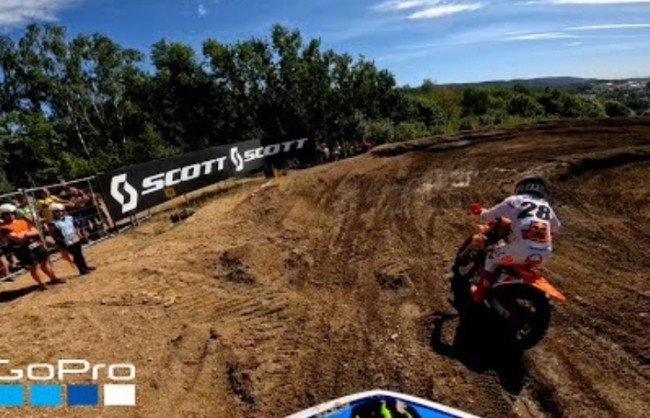 The tension continues in the battle for the MX2 world championship in the Czech Republic with Jago Geerts taking the red plate back off Tom Vialle after a poor opening moto from Vialle and then yet anthother excilerating duel to the end for the win in race two! And it was Geerts coming out on top as the duo continue to enthral in their rapid battle to be the best MX2 rider in the world in 2022.

See the intensity of the action from Geerts GoPro in moto two on a diffcult gripless and choppy Loket circuit below:

Geerts, who now leads by eight points heading into his home GP in Lommel, said: “I’m happy for sure. In the first heat, I didn’t have the best start and I was struggling a bit with the track, but then for the second race, I made a small change on the bike, and I took the Fox Holeshot, so I was happy with that. Then in the first lap I made a mistake and Tom passed me, but after that I felt strong on the bike and good on the track, so after like 15 minutes I passed Tom and then pushed until the end and won the race. I’m really happy with that and I’ve also got the championship lead back, so it will be nice to ride with the red plate in Lommel next week”.

While Vialle commented: “It was quite a tough day actually and the track here was really demanding. I made a mistake in the second turn of the first moto and that didn’t help me; for the rest of the race I couldn’t really push or attack the downhills. I just did the best I could. We made some changes for the second moto, a few suspension adjustments, and I felt much better. I was just behind Jago and we fought all moto. It was a positive end to the day. I only lost a couple of points for the championship and it looks like it’s going to go to the end so we’ll keep fighting.”