Sexton, Roczen and the Lawrence brothers on Millville 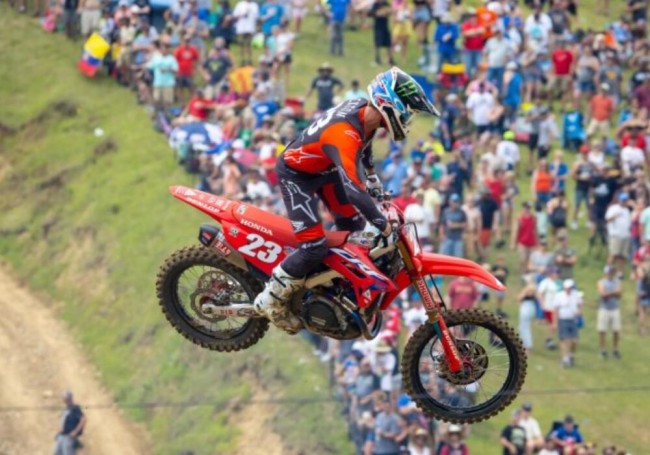 Sexton: “The first and second moto kind of flip-flopped. The first moto, I felt like I had really good pace; I got to the back of Eli, made a pass and tried to break away. Then I made this really small mistake; I missed a rut by a little bit, washed the front end, and my bike flipped over and tagged me in the back and ripped my jersey. Luckily I’m tall because that was not a good spot to go down, in the middle of that downhill. It was kind of a tricky situation to get out of there, and then I just sort of rode it in. In the second moto I got a good start, but Eli had better lines than I did and got around me. Then it was just who could go faster the rest of the moto. We were dropping lap times, and one of my best was two laps to go. It’s going to be a battle. I’m obviously bummed to lose the red plate, but we’ve still got a lot of racing left. I’ve got to get better—that’s the bottom line.”

Roczen: “Millville was once again a really rough one. I was really good in qualifying practice, but I haven’t done many changes to the bike. I’ve had my struggles, but the biggest problem was me going down in both motos—pretty big ones, too. I got lucky and rolled out of both crashes really well, but the crash in the first moto was a little bit heavier; it took me a long time to get going again because I was basically against traffic. I was dead last, and after that I couldn’t really get going much; I wasn’t feeling too good on the track. It was a really rough weekend with terrible results, but sometimes that’s the way it goes. I’m looking forward to having another go at it next weekend and then we have two off-weekends when I hope we can make a bunch of gains and then do a strong push for the last rounds. First up is Washougal though, and I look forward to the nice scenery and getting back to the races.”

Jett Lawrence: “It was good—another 1-1. The first one I got the holeshot but really had to work for; I had Hunter in front, and I made a couple mistakes, which made me drop two positions. I was able to get him at the end, with some lappers. The second one was a lot easier; I got a good start, and Hunter was a bit back. I got that gap and was able to maintain. I had a lot better flow, so it was a lot smoother.”

Hunter Lawrence: “Moto 1 was tough. I was leading for the majority of the race, and then just an unfortunate deal when the lappers let Jett get through. Then he was trying to win, and I was giving it everything to try and get close enough to have that window of opportunity, to make a pass. Those ones are interesting—just like Eli and Chase in the 450s, sending it the last three laps; we pretty much emptied the tank. The second moto was looking pretty good before the restart, I must say. We were in first, ticking the boxes toward an overall, and unfortunately the accident happened. I used up all my good starts and sucked on the third one. [laughs] It was a rough one, coming through the pack, expending a lot of energy trying to bridge up. I was just hanging on until the end of the moto.”

Lars Lindstrom: “When you have four really awesome riders, it makes it difficult to know how to feel when you have two guys that absolutely crush it and two guys who have a little bit of an off day. Hunter’s first moto was amazing—one of the best battles of the year, just like at High Point. His second moto didn’t go to plan, especially after that restart, when he didn’t get a good start. And with Kenny not feeling like himself, it made it difficult. But Chase showed today that he’s going to make it interesting for the entire series; for him to catch and pass Eli is a statement. Obviously, he had his little tip-over, but I can’t wait to see what the rest of the series has to offer for him. Jett, going 1-1, is just on another level. We say that all the time, but it’s true, and that first moto with the two brothers was so much fun to watch.”