Video: Behind the scenes – SixtyTwo Husqvarna at Riola 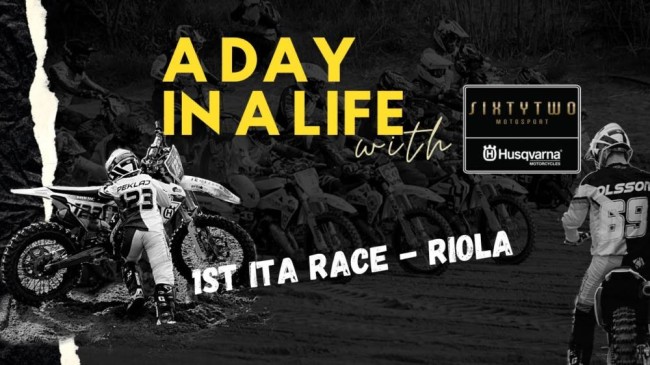 The first race of the season is done. We have a few positive points from this weekend on which we can build on. Very good starts for Jaka for the first time in MX125 class and a surprising speed for Filip in the race.

Jaka Peklaj – finished time practice on 29th place, which gave him an outside gate pick, but he still manage to made a very good start in the first moto. After lap 1 he was around 30th place and with a solid ride he came back to 20th place. Second race he took an awesome top 5 start but he crashed on a second lap which resulted as 31st place.

Filip Olsson – finished his time practice on 18th place. With a solid start in first moto, he got caught in a crash on the first jump. He started from 36th place but just in a few laps he was 19th. His speed was impressive, but a technical clutch problem forced him to stop the race earlier. Due to an Italian rule, he was not able to ride superfinal race, as he wasn’t in the top 20 in the first race.

Klemen Gerčar: “First race is in the book. I’m happy with both riders performance on the bike right now. It’s a bit early to be in the best shape, but still race results didn’t show our performance right now. I hope a technical luck will be on our side in the future because as a team we are really putting all effort in”.