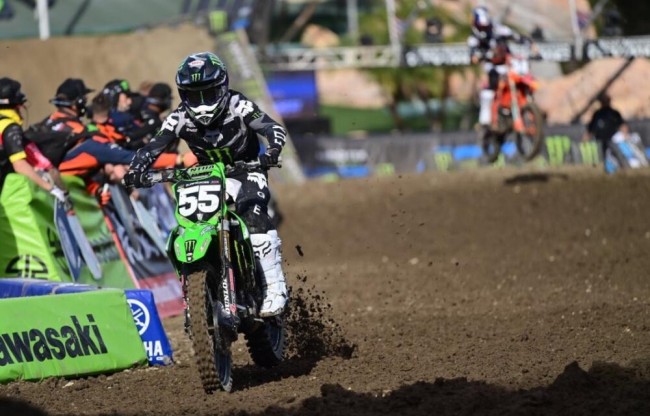 A very down Austin Forkner released a five minute video explaining how he is feeling and the damage to his knee that will keep him out for the rest of the supercross season after that brutal start crash. Forkner had been the man on form all day and looked like the one guy who could challenge Jett for the title.

“Thank you guys for the prayers and positive support. This one is tough and I’ll be honest, I’m struggling quite a bpit mentally right now. It is what it is.”

“Not completey destroyed, but it’s ACL. ACL’s is the long one – six months. I have a break in my hand also, just a little bone in my hand, it’s not a huge deal.

“It’s so tough to deal with this right now, I had such a good off-season, super low-key, super chill. At this point, I feel embarrassed. I’m obviously extremely disappointed with myself, I’m disgusted with myself. I don’t even want to look at people in the face. it’s tough because now this is my third year where I’ve been out of the championship within two races.

“The actual crash itself, I am not blaming everybody. People say it was a start crash it wasn’t your fault. I don’t like having that outlook, But I like to take responsibilty when I can, if I had got a better jump, I would have had the wheel on thise guys and we wouldn’t have hit. Me and RJ kind of got together coming out of the gate just a little bit, and my front wheel was off the ground and those guys came over from the outside. My front wheel was up, so I couldn’t move around. I leant it down into the back of Cameron’s wheel, dabbed my knee and right when I dabbed my knee, in that quarter of a second from I dabbed my knee before I got ejected, i know it was done. Obviously, I am super bummed, more than bummed, really really upset.”