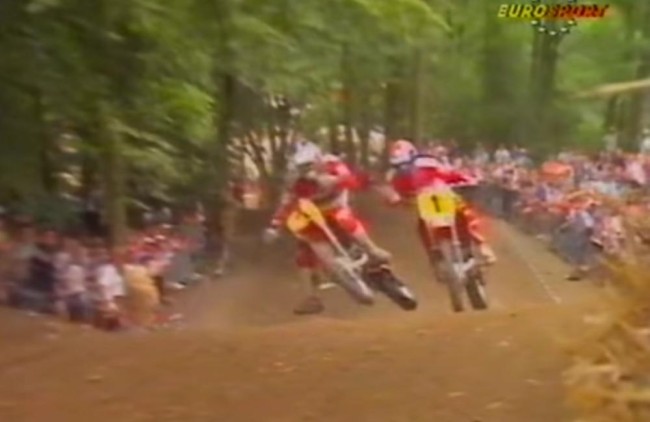 Some brilliant footage of a legendary battling between defending world champ, the late Eric Geboers and Britain’s David Thorpe with Thorpe getting the best of Belgian after two titanic and legendary battles that have went down int he annuls of motocross history.

The win would be pivotal in helping Thorpe win his third 500cc world title that season with the Brit winning the final four motos of the year after Namur to win the championship in style.

In our interview with Thorpe, he fondly remembered those battles: “They were great times and I would have them all back in a heartbeat if I am honest because I thoroughly enjoyed it all.”

And when asked about the mental strength it takes to win in those pivotal moments Thorpe said: “From a very young age Bryan Wade, I used to do the training with Wade camps, and he always used to talk about racing under pressure, i.e., in your head. You see a lot of people lose their head and do silly things, they are not the people that win championships. Championships are always won with a cool head. And he would always say championships are won on your bad days not your good days – and that stuck with me.”

See one of the most memorable battles from the 80s at the legendary Namur circuit with two legendary riders who won eight world titles between them going to war on their special full factory 500 Hondas, below: