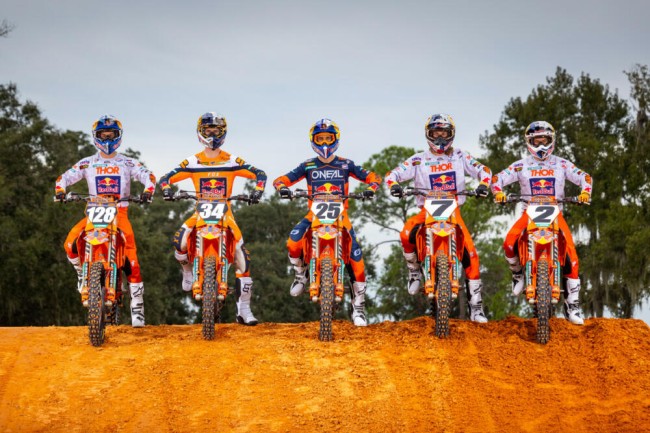 MURRIETA, Calif. – Forming the base of the newly-launched 2023 KTM 450 SX-F FACTORY EDITION, Red Bull KTM Factory Racing’s Cooper Webb, Marvin Musquin and Aaron Plessinger put their wheels to the dirt on Tuesday to showcase the new bike and livery in front of the press at the team’s practice facility, RD Field. Joining their premier 450 class teammates for the first official launch as a 250-class duo were Northern California native Maximus Vohland and two-time MX2 World Champion Tom Vialle, both aboard the KTM 250 SX-F.

With even more on the line than ever before with the SuperMotocross World Championship, the five-rider Red Bull KTM Factory Racing team is chomping at the bit for the new season and new format of racing. It will commence with the AMA Supercross season-opener in Anaheim, Calif. on January 7, before spanning 31 events, including the AMA Pro Motocross Championship outdoors, for the remainder of the year.

Webb, a two-time champion in the 450SX class, is back in action and looking for redemption in 2023 as a title contender this season. Since first joining Red Bull KTM Factory Racing in 2019 and claiming a maiden premier class crown, Webb has consistently been a title candidate and the 27-year-old is determined to challenge for a third championship once again.

Joining the squad for his 13th consecutive season in the U.S., French rider Marvin Musquin looks to build on his strong performance in 2022. Musquin, 32, finished fourth in this year’s 450SX standings with a Triple Crown victory to his credit, alongside six podium finishes in total, and he now looks to build upon those results in the new year.

Aaron Plessinger will return for his second season at Red Bull KTM Factory Racing. He earned a season-high of second in the Oakland 450SX Main Event and then later, upon return from injury, delivered multiple podiums in the 450MX class outdoors. The 26-year-old is now motivated to make his mark on 2023 alongside both Webb and Musquin.

Cooper Webb: “I’m really looking forward to the upcoming season. It’ll be another great year with the Red Bull KTM Factory Racing team. We had a bit of a rough year last year, but we’re looking to get things back on track for this year. The crew’s been working hard, and we’ve been doing a lot of testing. I’m back with Aldon Baker, so we’re back exactly like we were in 2021 and 2019. I’m looking forward to getting back on top this year, the goal is to go out and try to win a championship again.”

Marvin Musquin: “Right now, it’s obviously the off-season with bootcamp and hard training. The team is working hard to learn the bike even more for the second season and we still have a couple of weeks before the racing starts for 2023. We had a trip in Paris and raced – it was nice to get behind the gate and do one race, at least, before the start of the season. I’m still based in California and following the program with DV [David Vuillemin]. I really like the program and DV gets to know me a little more, so hopefully we can be better for next year.”

Aaron Plessinger: “I’m super excited for 2023, I’m ready to get back behind the gate! Supercross was cut short for me last year and I’m looking forward to getting back out there and showing everybody what I can do. The Red Bull KTM Factory Racing team has put in a ton of work to get this bike to where we need it to be for this year and I’m feeling really good on it. I’ve been back riding for a while now and I’m super stoked on my fitness and where I am on the bike right now. Only good things should come from here on out. We have three new races on the schedule this year, so I’m also really excited for that. I’m looking forward to spending the whole year with my mechanic, Jade, and getting some race wins. He deserves it. The whole team deserves it. I deserve it. We’ve been working hard, so time to let the hard work pay off. I’m just ready to get back out there and do some racing with my boys!”

On the 250 side, Max Vohland continues to gain experience in the professional ranks after claiming sixth overall in the 250MX standings this year. At 19 years of age, Vohland is excited to return to supercross for a third attempt, this year in the 250SX Western Regional Championship, and has his sights firmly set on making an impact throughout the SuperMotocross World Championship season.

Max Vohland: “I’m excited about the 2023 season. We made some significant steps forward at the end of the motocross nationals and have built on that progress in our SX testing this off-season. I’ve been putting in the work at The Baker’s Factory and I look forward to showing what we have done. My goals are to position myself as a front-runner in supercross, be a consistent podium guy for the outdoors, and to try to win the SuperMotocross World Championship.”

Making his anticipated U.S. racing debut in 2023, 22-year-old French rider Tom Vialle is eager for the gate to drop for the 250SX Eastern Regional Championship come February. Based in Florida at The Baker’s Factory alongside his Red Bull KTM teammates, the two-time and current MX2 World Champion also looks ahead to the Pro Motocross season, beginning in May.

Tom Vialle: “For me, it’s a new life. After winning the title in 2022 in MX2 World Championships, I moved to the U.S. and it was a tough decision, but so far everything has been so good. I’m training in Florida with Aldon and the group at The Baker’s Factory and everything so far, so good. I like it a lot. I enjoy riding supercross, it’s a new discipline for me so I have a lot to learn. I’m doing a good job training with the team and mechanic – everyone is really nice to me, so we’ve really moved forward. I’ve never raced a supercross here in the U.S., so I’m really excited about it. Just to go there and see what it’s going to be like to ride at night in the stadium, and to ride in front of so many fans is going to be a big thing for me. And then I will move to motocross in the summer, I am also excited for that. That will be a new challenge for me – a little bit closer to what I’ve been training for the last four years in Europe – but I’m really excited about racing both SX and MX for the first time in the U.S. For me, a lot of new things are coming and I can’t wait to start racing.”

Ian Harrison, Red Bull KTM Factory Racing Team Manager: “We are just a month away from going into the 2023 season. We’re out in California today with all the guys riding, which is nice to see them all healthy and going well. We have made some progress on the bikes and it seems like it’s working well at the moment for the riders – you never know until you go racing. We have a big team, the biggest we’ve had since I’ve been a part of KTM – with five riders. We have 250 riders on each coast, which we are excited about. With the 450 guys, they all seem ready to go, so we just have to keep them safe and keep building until January comes.”