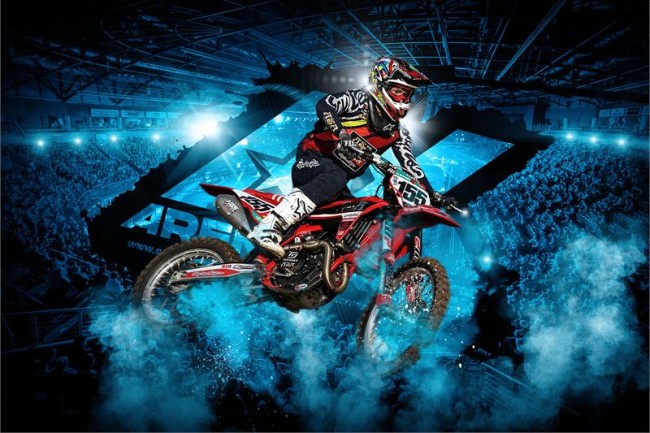 Under the stewardship of one of the UK’s most successful Motocross of Nations managers and CI Sport boss, Mark Chamberlain, the team will compete on GasGas machinery with Booker on a 250cc and Brunell on a 450cc.

Brunell is a seasoned Arenacross athlete. He has been amongst the top runners in every Pro Championship of the series in its current format. In recent years he has continued riding in the States during the UK’s winter months and completed a life-long dream at the beginning of last year by contesting AMA Supercross. What’s more, he was the only British rider in the 450 class of the World Supercross British GP at Cardiff in October, where he did himself, and his country, proud by taking a top 10 race result and holding his own against the leading international riders.

Booker also has history with the UK Arenacross series but has never had the run of good luck he richly deserved. He currently works for CI Sport and is a Troy Lee Designs (TLD) ambassador for MX and MTB.

“We’ve signed up for 2023 first and foremost because we believe Arenacross in the UK is really important,” said Chamberlain. “It attracts people from outside the sport and plays a pivotal role in the industry, which is a key benefit for companies such as CI Sport and our brands.

“We are the exclusive UK distributor for Troy Lee Designs, Alpinestars, DEP exhausts, Renthal handlebars, and Armor Vision, amongst others. We feel this is a great platform for gaining exposure to both new and existing customers.

“Also, with the news that it’s a full ACU British Championship, it connects better with motocross fans and is important for our brands.

“We believe Jack has a good chance to do well in the 2023 Championship. He has great experience and has continued to train and ride hard even in the off-season. Jordan too will be in the frame; he’s itching to get racing again and is putting in the training hours – when work allows that is. We’re looking forward to getting back to Belfast in January.”

Arenacross promoter Matt Bates added; “It’s great to see new teams backing Arenacross for 2023, so to see Mark get excited about going racing again is testament to what we’re building. Equally Jack’s constant dedication to indoor racing and Supercross puts him firmly in place as one of the favourites for the all-new British Championship series… and what can you say about Jordan. He’s without doubt a talent, but more than anything he’s a great ambassador for the sport with a very strong media presence, he’ll play an important role in gaining even wider exposure for Arenacross and the Team!”

Clearly enthused about his return to the Arenacross Tour, Jack Brunell added; “I’ve been riding a lot since the last UK Arenacross Tour. I’ve ridden in the States and was invited to be a part of the World SX at Cardiff – which was an honour.

“It’s brilliant that the series will be all-British. It’s what the sport needs and has probably played a big part in why the 2023 championship has attracted the calibre of motocross riders that have recently been announced. It will be interesting to see how good they are!

“Mark at CI Sport has really helped me out and I look forward to riding for the team and also to partnering with Jordan. It’s going to be a really professional, but chilled team.

“My dad was always my biggest supporter. Sadly, he passed away a couple of years’ ago so I’m going all out to win this in his memory. I’ve also got two little boys now, and another baby on the way, so that’s another incentive to go out and make them all proud.