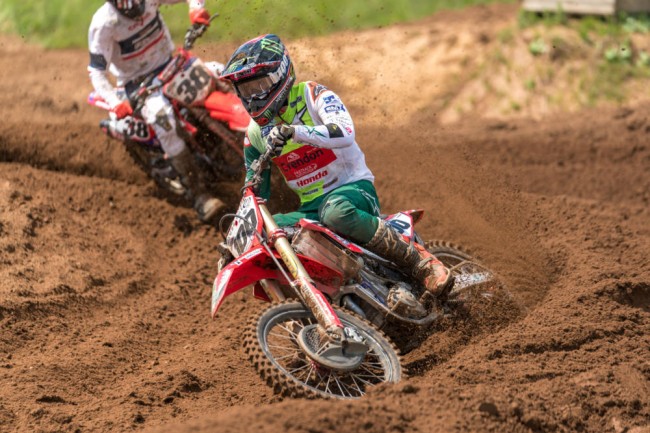 What started out as a fantastic performance in qualifying quickly turned into disappointment for the Crendon Fastrack Honda team in the opening MX Nationals series at Fatcat Motoparc near Doncaster.

Defending champion Tommy Searle had been feeling ill in the run up to the event but decided to give it his best shot and ride, and then set the fastest lap in MX1 qualifying on his Honda CRF450R. As the temperatures rose rapidly and the track cut up significantly, Searle gated well and held fourth in the opening race but the conditions took their toll and he quickly dropped back to outside the top ten. It was decided the best course of action was for him to withdraw from the event, and focus on recovery for next week’s British championship where he holds the red plate.

Searle said: “I managed a lap in qualifying that was fast enough for pole. But I just felt horrendous with some sort of illness. I don’t want to make matters worse or risk making a mistake, ruining the rest of the season. A couple days to recover and I’ll be sound.”

In the MX2 class, Honda CRF250R rider Jay Hague was sixth in qualifying and in the first race completed the first lap in fourth place. A crash dropped him way back down the field and he put on determined charge back through the field to take 13th. But in race two he crashed hard on the first lap and was taken to hospital for checks, where he was kept in overnight.

Luckily, medical tests proved there are no serious injuries and a decision will be taken later this week whether he’s recovered enough to contest the weekend’s British championship at Canada Heights in Kent.

Hague said: “I was lucky enough to get no serious injuries but I’ve got an injury to my ribs and a really nasty graze. It’s hard to move around myself at the moment as I’m that sore. But with plenty of rest this week, I hope to be back racing at the weekend.”

Team manager Dave Thorpe said: “We have to take the positives from this weekend, which are that both riders are not seriously hurt and will soon be back in action.”

The team’s other MX1 rider Jake Nicholls is still recovering from a broken shoulder blade but will be back on the back within a few weeks.