Top five for Pancar at Mantova 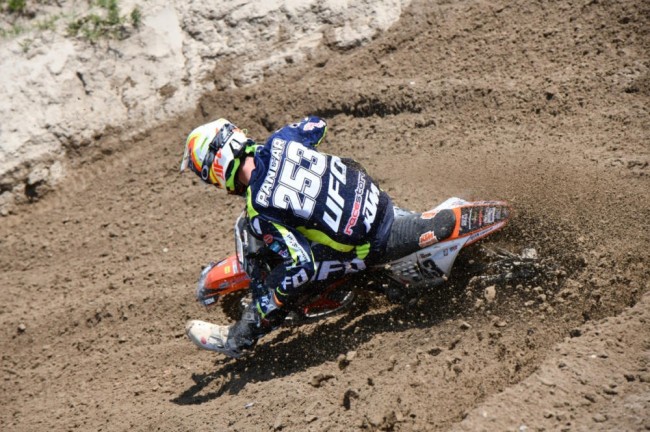 The second round of the season with the Italian Motocross Championship on the sandy Mantova track, the KTM Racestore Team as well as Jan Pancar will field the returning Jacopo Fabbri after a long stop due to an injury.

In Saturday’s qualification the Slovenian Pancar is immediately at ease on the “Mantova” track, setting the third time in his group, proving that he can compete with the best of the Mx2 class, Jacopo Fabbri on his return manages to center the qualification in group A with the twelfth time.

At the start of the first heat Jan Pancar started very well at the lowering of the starting gate and entered third place, the Slovenian maintained the position for most of the race and only in the last laps did he lose a few positions due to a crash, still obtaining fifth place. Jacopo Fabbri still does not have the right physical shape to keep up the pace of Mx2 and finished 34th also due to a contact with another driver.

In race 2 Pancar fails to repeat the good start of the first heat, but thanks to an excellent race pace and setting excellent lap times he recovered many positions going to cross the finish line with a fantastic fourth position. Fabbri, on the other hand, in pain after the crash in race 1, manages to finish only 32nd.

In the overall ranking of the day, Jan Pancar finishes 5th

The next appointment with the Prestige Italian Championship is for 8-9 May in Montevarchi.

Paolo Mencacci comments on the race as follows: “I am very happy with Jan, race after race he is improving a lot and the results can be seen and this means that we are on the right path, for Jacopo we knew it would not be an easy race for the month of forced stop. due to the injury but the speed is there and I am satisfied with this even if there is still work to be done”.