Tomac is glad the title pressure is off! 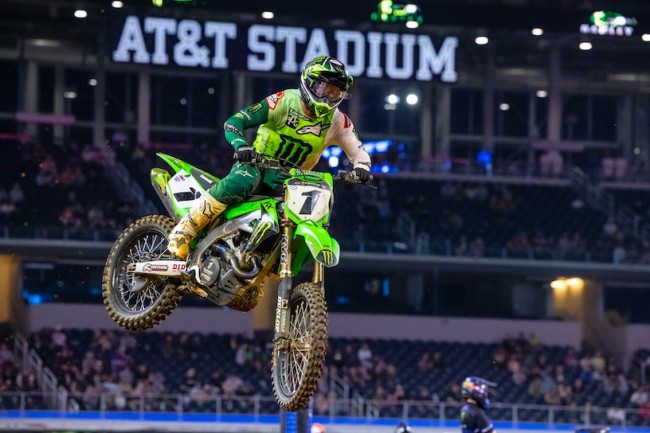 Defending supercross champion, Eli Tomac, has curiously admitted to feeling less pressure now that his title chances are all but over after losing three more points to Webb at Arlington to put him 36 points back of the Red Bull KTM rider in the championship.

“It’s been a few races where I feel like that (championship) weight has been lifted off me,” Tomac surprisingly conceded in the post-race press conference. “It’s nothing you want, right? I was just glad to have a better race in a stadium environment—outside of Daytona. It was a good start, better riding throughout the whole main. It was a good push, just not enough in the end.”

However, he rejected the idea that he had less motivation this season now that he has won the championship. “It might look like that from the outside, but no,” contested the factory Kawasaki man. “There’s no better feeling than winning and that’s the only reason I line up every time, and that’s to get a win. It’s just been position at the beginning of the race, strong field, and just not starting up front. That’s been big for me.”

“Tonight, was much better for a tighter-track situation,” continued Tomac on why his result was better on Tuesday night. “That’s where I’ve been struggling, you know, when I’m buried in the pack, I haven’t been able to come through, right? The field is much tougher in that situation, this year, no doubt, than in the past. That’s it. It’s not a motivation thing.”

The reality is however that Eli hasn’t quite looked the same indoors or out since winning the supercross title last year despite still having flashes of the speed that saw him be the fastest man in America the previous few seasons whether it was SX or MX. Winning that 2020 supercross title was a big deal for his legacy, it was his ultimate goal and the crowning achievement in Eli’s already very successful career, and just maybe, deep down, he’s happy with that.