Tomac and McAdoo on Atlanta 3 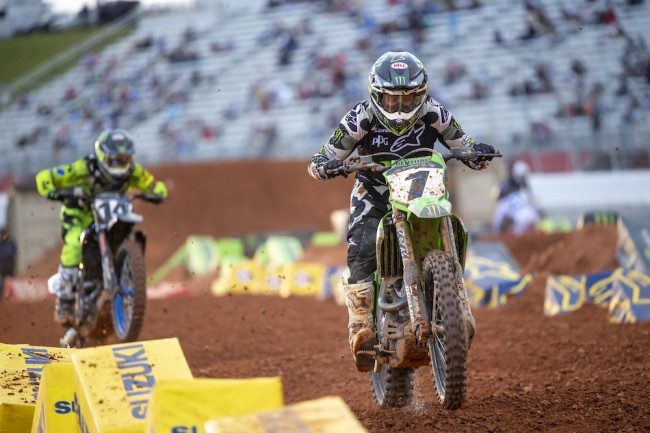 Foothill Ranch, Calif. (April 18, 2021) – Round 15 of the Monster Energy® AMA Supercross, an FIM World Championship completed its third and final round in Atlanta, Georgia, on Saturday night where Monster Energy Kawasaki rider Eli Tomac captured his eighth podium of the season with a third-place finish. In the 250SX class, Monster Energy/Pro Circuit/Kawasaki rider Seth Hammaker rode consistent for the entire main event to earn a third place finish, while teammate Cameron McAdoo battled through adversity to come away with a 13th place finish.

Tomac: “I feel like I was riding a lot better in the main event than I was during the heat race or practice. This track layout had the longest whoops sections we’ve seen all year and it took me a while to get them dialed. Before the main event, I had the team make a last-minute change to the suspension and that slight change made a world of difference that showed in the main. I was cornering faster, skimming the whoops and able to make up time on the riders ahead. I’m satisfied with the podium today, but we’ll look to improve on this come next weekend.”

McAdoo: “Today was a rough one. I came into the race still recovering from my crash on Tuesday and only made things harder with another get-off during qualifying that left me and my bike banged up. Crashing is never fun, but I accept it’s part of the sport. You can knock me down nine times and I’ll get back up 10.  Overall, I’m proud of my entire team at Monster Energy/Pro Circuit/Kawasaki for getting my bike dialed to race and proud of myself for never giving up.  We’ll regroup as a team during this short break and come ready to fight down to the last lap during the East/West shootout.”

Hammaker: “Man, it was absolute chaos out there tonight! I had a crash in practice that had me feeling a little banged up going into the main event. The track presented us with many challenges, but I’m glad I was able to end this three-race run in Atlanta on a high note and get myself another podium finish. We have a weekend off this next round, which will help me rest up and battle for a strong end to the season during the last round in Salt Lake City. I want to give a quick thank you to my entire team for always sticking by me and being a huge help.”