Tomac and Ferrandis on San Diego 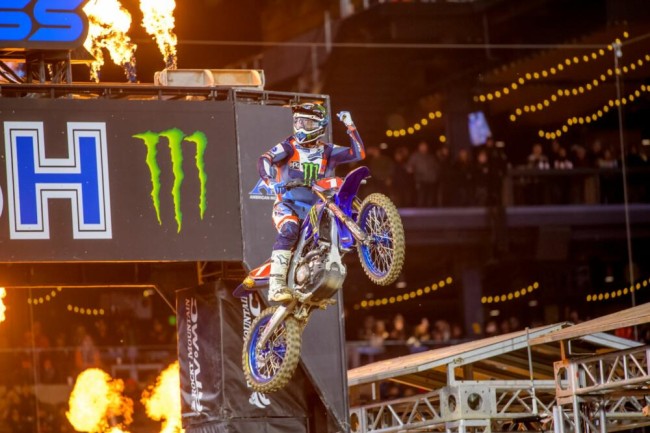 Tomac got the day off to a good start, qualifying fourth, and followed that up with a dominant performance in his heat race, grabbing the holeshot and the win. Although he was unable to repeat that start in the main event, he quickly made his way to third and moved into the top spot by lap five. He set a hot pace up front and built a comfortable lead, which proved to be key late in the race as the competition closed the gap while Tomac navigated his way through lapped traffic. The Coloradan kept cool under pressure to score his second-consecutive victory of the season and leave with 52 points.

Ferrandis qualified fifth behind his teammate and got off to a good start in his heat race. Unfortunately, a small mistake shuffled the Frenchman to fourth giving him a less-than-ideal gate pick for the main event. Battling in the top 10 after the start, Ferrandis kept pushing and fought his way forward to sixth, where he would ultimately finish.

Tomac: “It was another great race for us. I was able to come out with the holeshot and the heat race win. Then in the main event, I didn’t get the holeshot this time, but I was right there. I made a couple of key passes on that first lap and then got to Cooper (Webb). I had a couple of better lines and was able to get the momentum up the dragon back and made a block pass there. I rode some good laps in the middle of the race, but then toward the end, I got a little bit stuck behind some lappers. Some races are easier than others to get around guys, but it’s just the way it goes when you’re the lead guy. When you’ve got a guy like Cooper right behind you, it does not make your life easy, but I kept pushing. It was good that I had that little bit of a gap because he was pretty close in the end, but overall, it was another fantastic race for us with this new motorcycle.”

Ferrandis: Overall, the day went well. I felt good all day and got a good start in practice. Going into the night show, I was feeling pretty decent. I got a good start in the heat race, but then I made a small mistake, and it was difficult for me to feel good after that. In the main event, it was kind of the opposite; I got a bad start and came back through the field. It’s very frustrating for me since I try very hard to be the best I can be. We need to analyze this with the team and come back stronger in Anaheim.”

Jeremy Coker: “It was a good day and night for both riders. I know the result may not be exactly where Dylan wants to be, but his speed was right there. His lap times were good, and he was right there with the front pack and could see the podium, and that’s a good thing. It was another exceptional night for Eli. He continues to prove that he’s the fastest guy out there, no matter what it takes. Still, we’ve got to keep pushing to be better and to stay on top.”