Tomac and Cianciarulo on High Point 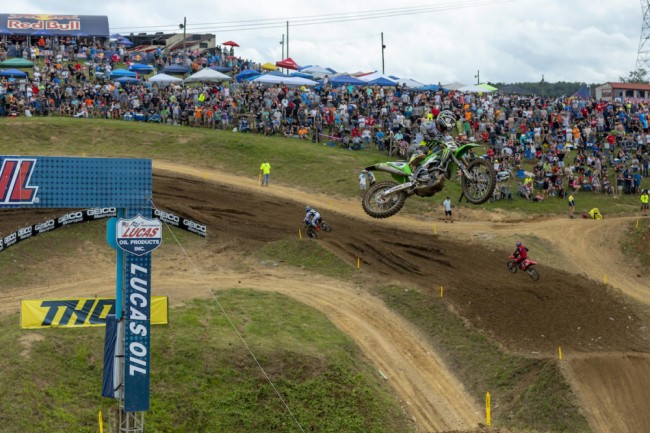 Foothill Ranch, Calif. (June 20, 2021) – After a weekend off, the 2021 AMA Pro Motocross Championship resumed racing on Saturday for Round 3 from High Point Raceway, where both Monster Energy® Kawasaki riders Adam Cianciarulo and Eli Tomac grabbed their first moto wins of the series and finished second and third overall, respectively in the 450 class. In the 250 class, Monster Energy/Pro Circuit/Kawasaki rider Austin Forkner finished a season-best sixth place overall, with Jo Shimoda ending the day 11th overall.

Round 3 marked the 44th time a national motocross event was held at High Point Raceway. Despite overcast clouds and heavy rain in the forecast, only a drizzle would fall throughout Saturday’s race, keeping the track in perfect racing condition. Cianciarulo set the tone early for the team after putting his impressive speed on display during qualifying and coming away with the second-fastest lap time of 2:00.960. His teammate, Tomac, also had a good showing in qualifying with a 2:02.363 fast lap, good enough to qualify in fifth place.

From start to finish, the first 450 class moto belonged to the No. 9 KX™450. Cianciarulo rocketed out of the gate off the start to snag the holeshot. After rounding the first corner in the lead, he used the clear track to build a comfortable gap from the rest of the pack and pull away en-route to his first moto win of the 2021 outdoor season. Despite colliding with a downed lapped rider and falling to the ground in the final turn of the last lap, it was a near-perfect moto for the No. 9 machine. Tomac started the first moto inside the top-10 on the opening lap and immediately charged through the field. The No. 3 showed a glimpse of his familiar, championship-winning form and closed the gap on the riders ahead of him advancing to sixth place, where he would ultimately finish the race.

Moto 2 for the 450 class provided some of the most exciting racing fans have seen all season long. The race began with Cianciarulo and Tomac both battling for the holeshot, which led to the Monster Energy Kawasaki duo making quick work of the lead riders and began pulling away. Much like the first moto, Cianciarulo was out front early and building a comfortable gap ahead of the rest of the field, but his pace this time wasn’t enough to keep the three-time 450 class champion behind him. Tomac chased down Cianciarulo and, after a brief back-and-forth battle, the Colorado native blitzed the back section of the Pennsylvania track in famous Tomac style, wide open, to pass his teammate and take over the lead. From there, Tomac was in a league of his own and rode away comfortably to collect his first moto win of the season, finishing third overall (6-1) on the day. Cianciarulo, on the other hand, would find himself in a three-way battle for second place in the moto and the overall win. Despite his best efforts, Cianciarulo would finish the moto in fourth place, which earned him second place overall (1-4).

Adam Cianciarulo: “It sure feels good to get that first moto win under my belt. I thought I had a decent sized gap in the second moto, but Eli was flying and caught me a bit off-guard. Fair play to him and the others, they rode amazing. I’m stoked with how awesome my bike has been feeling lately. I honestly believe with a little more endurance, I can be a regular winner this season. Thanks to everyone at Monster Energy Kawasaki for giving me a great bike to ride and always supporting me. We have another break coming up, but I’m ready to build off of this and get back to racing.”

Eli Tomac: “This was a big one for us. I’ve been in a bit of slump these last two races, so to get a win and feel like myself on the bike again is huge. After I got off the gate in Moto 2 and saw I had a good jump, I knew it was going to be a good moto. I was able to catch Adam rather quickly and once I was in the clean air, I rode my own race and started pulling away. This was an exciting race, and I can’t wait to keep this momentum rolling into RedBud. Thanks again to the entire Monster Energy Kawasaki squad for all the hard work this weekend.