Todd on a frustrating Foxhill 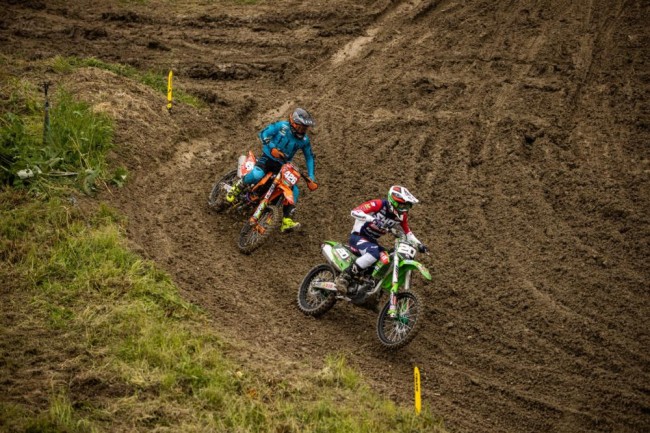 Round four of the ACU British Motocross Championship took place this weekend at the historic Foxhill circuit. The rain stayed away as the day started great for the Bike It MTX Kawasaki Team, with Hammal and Todd posting 3rd and 5th in qualifying respectively.

In race one it was another holeshot on the green Kawasaki KX250 for Wilson  Todd, as he charged ahead of the pack. With Mewse hot on his heels it was only a matter of time before the championship leader overtook the Australian. Todd was able to keep a solid pace for the remainder of the moto and take home 2nd place. A slightly worse start for Hammal saw him near the front of the pack, but a few crashes dropped him back to mid pack, where he would then fight his way through back to 6th.

In Race two things started off badly for Hammal, who after going through a rut that had a large stone in, his chain snapped and was stranded trackside for the remainder of the moto. Things were looking good for Todd after a similar incident had affected Mewse, Todd led the race comfortably and with 3 laps to go was looking to bring home the overall – until the same section of track caused a chain derailment for Todd, who had to accept defeat and was unable to finish the race.

The team will now get ready for their local GP at Matterley Basin, Winchester.

Wilson Todd: “Fourth round of the British Championship done, 2nd and a DNF. I had a good lead in the second race until 3 laps from the flag a large rock in one of the ruts bent out the chain guide and derailed the chain. I didn’t quite have the pace of 426 but I can feel my fitness coming back.”

Taylor Hammal: “Bit of a strange day really, I didn’t expect to ride but I felt good enough to get some bike time ahead of Matterley Basin this weekend. I started off strong, with a 3rd in qualifying which I was happy about. The first race started well but two crashes off the track put me back, and  I had to come through to 6th. I told myself not to overdo it or do anything unnecessary but I ended up doing the opposite. In race two a rock snapped the chain. Overall I’m happy to get back out there and to ride well, as I wasn’t sure how my finger would hold up.”

Steve Dixon: “It was good to see Taylor back after his finger injury, It’s true character which is what you need in a Grand Prix. I was happy with the first race, unfortunately in the second race, a large rock in a rock derailed the chain, which also happened to a lot of people. I’m happy with Wilson, he’s riding well and although he doesn’t quite have the speed of Conrad, we’re still not too far from his surgery so it’s looking promising looking forward. Unfortunately, the same thing happened to Wilson with only 3 laps to go. I spoke to the club after and a large rock was the culprit. It will be good to see how both riders get on this weekend at Matterley.”