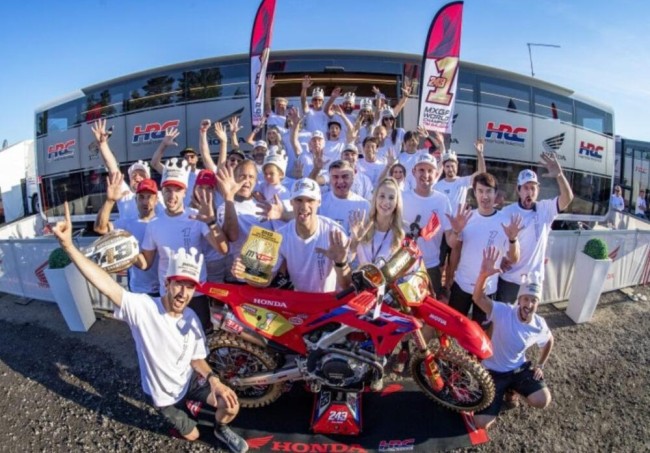 Team HRC’s Tim Gajser became the most successful current MXGP rider after winning his fifth world title and the fourth in the premier MXGP class at the MXGP of Finland. The Honda CRF450R rider wrapped up this year’s championship two rounds early, after dominating periods of what has been a very challenging campaign.

Starting off the season with six wins in the first seven rounds gave him a platform that none of his rivals could get near, and further wins in Germany and a perfect performance in Indonesia meant that he was able to cement his crown and cruise home to yet another world title. This weekend at the sandy Hyvinkaa track, the #243 wasn’t at his best, but he was still able to post six-seven results, which was more than enough to give him a 104-point advantage and wrap-up the championship with two rounds still to race. With the pressure of winning his fifth world championship over, expect Gajser to be battling for wins once again, and adding to what is already a remarkable 2022 season.

Unfortunately, teammate Mitch Evans wasn’t able to put his practice and qualification speed into either of the two motos today, as first lap crashes in each race ruined his chances of challenging for a podium. The Australian had proved in every other session that he was a contender on this gruelling Hyvinkaa surface, but luck wasn’t on his side and instead has to prepare himself for the final two rounds of the season where he’ll be once again aiming to be up there at the front of the field.

The world championship now heads to St Jean D’Angely in France next weekend, for the penultimate round of the series, with both riders highly motivated to get back at the sharp end of this MXGP field. Gajser will be looking to add to his eight GP overalls, while Evans will be hoping to get his first podium of the season for what should be another action-packed weekend of high-quality motocross riding.

Tim Gajser: Wow! What a day. I definitely didn’t ride my best, but I got the job done and that’s what I set out to achieve at the beginning of the day. Five world titles, and I can’t believe it. It really hasn’t sunk in yet. A big thank you to the whole of Team HRC, the people at the races and all the support from Japan. Also thank you my girlfriend and all the support I receive from my fans around the world. It has been great to see so many of you cheering me on around the track and I can’t thank you enough. It is a special moment for me and I am just so happy to have got my fifth title!

Mitch Evans: Today was definitely not my day. I felt good coming into the motos but things just didn’t work out for me. A crash on the first lap in race one ruined any chance of a good result there, as I was almost last by the time I remounted. I charged through to 14th but it definitely wasn’t what I was after. Then a similar story in race two. Obviously, I’m really disappointed with how it went but I’m still fit, and motivated to get things right in the final two rounds of the season.

Marcus de Freitas:I am so happy for Tim, winning the championship with a couple of rounds to spare. He works so hard and thoroughly deserves all the success he gets and to win five world titles is an unbelievable achievement. The whole of Team HRC also deserve a lot of credit, for working hard and helping him get everything right, week in, week out. It hasn’t been an easy year but no one has stopped working for a second, and it shows in the results. Unfortunately, Mitch didn’t have the best of luck, but he’s really shown his speed the past few weeks and we are excited to head to the final two rounds, where both riders can really show how fast they are.