Thoughts from the Russian MXGP podium – Gajser, Herlings and Febvre 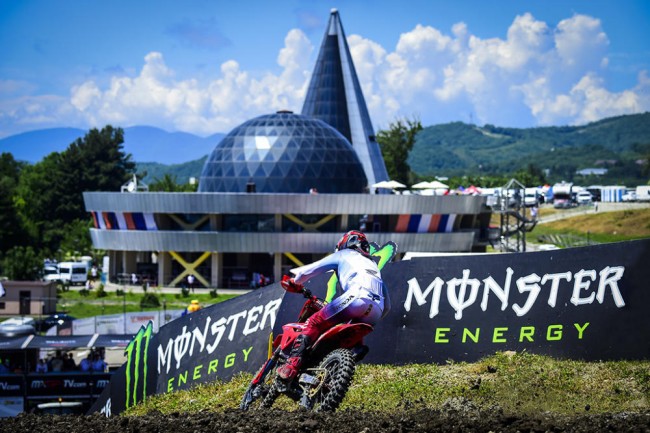 Tim Gajser: “I’m really happy to be back racing, it’s been a long period without races. In the first race I took a good start and my riding was good. In the second one, again my jump out of the gate was good and then someone from the inside pushed us completely off the track, I even jumped off the bike. I then searched for some lines for the first couple of laps and tried to make as many passes as possible and managed to get to Tony [Cairoli], then took a couple of laps to see what he was doing and then I made a pass for the win, so I’m happy”.

“Defending the title is always the same pressure but I try to put that to the side. It’s a new season, everybody is starting from zero and I just need to stay consistent, be smart as it’s a long season. I’m looking forward to Matterley Basin, it’s one of the best tracks and I’m really looking forward to racing there in two weeks’ time”.

Jeffrey Herlings: “I started the day with P1 in time practice. In the first race I had a bad start, I was fourth or something and was struggling with the guys in front, managed to finish fourth which was decent, not good but decent and then in the second race I had a really good start and was leading. Then I made a small mistake, crashed and lost a few places, then worked my way to third then Tim passed me and I was back in fourth. I then passed Pauls [Jonass] for third. I felt a little off the pace, obviously I had a bit of luck with Tony [ Cairoli] going down which I feel sorry for him but managed to finish second and second overall, so it was a decent day, I mean I haven’t race GP’s for 9 months, my fitness is not there yet but I just need to get back in the groove”.

“It’s a big improvement, obviously it’s [the foot] not like new, but I don’t have any pain”.

Romain Febvre: “I had a good start in both races but the second could have been better, but I managed to get into third really soon, I saw that I was faster than the other riders but I kind of took my time to look for some lines and Pauls Jonass was in front, he was riding securing the inside line everywhere and at one point I was really close to him, at the last moment he cut his line and went for the inside line and I was there so he took my front wheel and I ended up in the fence. Managed to get the bike and when I stood up I crashed again, so I lost about 20 seconds. I managed to come back to sixth so it’s pretty good, I didn’t think I was on the podium on the last lap, it’s on your bad days that you can fight for the championship, so I’m really happy to finish sixth in the second race and third overall”.

“I struggled with my injury that happened in 2019 but now it’s all good, I feel really good at the moment, my physical condition is pretty good, I’m really calm and I feel I can go fast, so I just need a couple of more races to get into the race condition”.