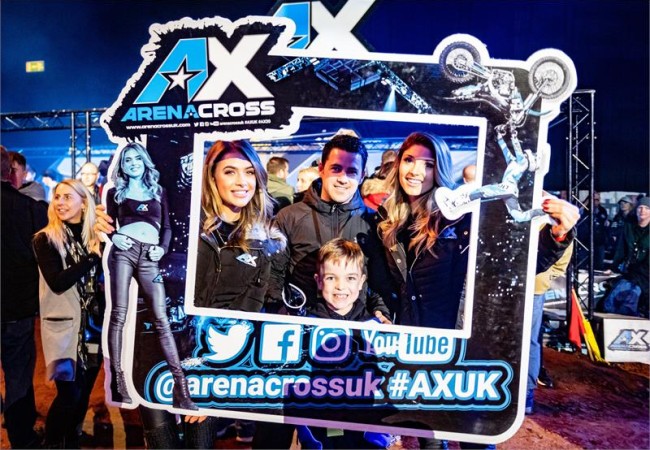 The 2023 Arenacross Tour presented by Fix Auto UK will open its doors to fans of action sports and high-level family entertainment next Friday the 20th of January when the show gets underway at the SSE Arena, Belfast.

The Belfast leg of the Tour is a double-header opener, representing rounds one and two of the first-ever official British Arenacross Championship. Such is the popularity of Arenacross in Belfast that the Saturday evening performance is already fully sold-out! However, for those quick enough, there are still a few tickets available for the Friday night.

The fact that the Best of British will compete at Arenacross 2023, and the youth classes are packed to the rafters, has been well documented. To help Arenacross enthusiasts get the best out of the series, the AX crew have pulled together ten ways to make everyone’s experience simply awesome!

Follow the Arenacross journey on social media. The Tour is vibing right now so keep current by following the @arneacrossuk channels. There are race interviews, industry predictions and much more, all ready to check out.

Plan to get there nice and early. Due to high attendance numbers at all venues, its suggested that spectators get to the arena and get seated early to make the most of the 60-minute show build-up.

What to wear? Stay Fresh in 2023 with the newest and coolest paddock wear that’s trending right now from Tour partners Alpine Stars and Troy Lee Designs.

Grab some autographs before AX starts. Beat the queue and get to the Arenacross tour early when the doors open at 6.30pm. Take selfies with the stars and snap up an autograph or two

Check out Traxxas incredible range of RC Cars. Non-stop Entertainment AX partners Traxxas are giving everyone the opportunity to shred their range of incredible RC cars at every round of the tour… This can be done pre show or during the interval

Text to win! Every night the show is live, an E5 KTM, Husqvarna or GASGAS electric bike will be available to win. The competition is exclusive to the live AX audience at the venue – the winners will be announced live towards the end of the show.

Who will be crowned AX British Champion? Fans can play your part in predicting who’s going to top the podium at each round. Look out for Polls on social media and post your predictions to win a CI Sports bundle of casualwear.

The audience will have the decider. It’s going to be down to the Live audience on the night to vote for which rider gets the last spot in the Pro Final of each round. Voting will be via mobile phone on the night.

The best way to witness Arenacross is live with your family and friends. Limited tickets are still available for most rounds so snap yours up now and experience all the high-octane action before it’s too late…