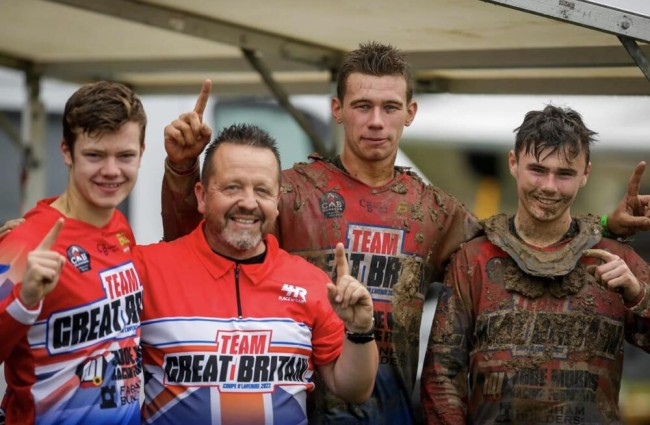 It was a special day for Team GB that contested the Coupe de l’Avenir in Belgium as they won the Nations overall in tricky and muddy conditions.

Sam Nunn was the star of the show for the British team as he won the open class overall finishing 3-2 in the moto’s to secure the overall ahead of Uldis Freibergs and the extremely talented Sacha Coenen.

Charlie Heyman also rode superb finishing fifth overall – he could be a future star if he can translate his speed to the EMX250 series next year.

It was also a solid day for Tom Grimshaw finishing eighth overall in the open class on his Chambers Husqvarna.

“Wow……just wow. We only went and won it!!!! What can I say about Team GB at the 2022 Coupe de l’Avenir, we were awesome….every rider, parent, mechanic, supporter – thank you. That was one proud moment. So many other thank you’s to all of those people who helped us get here. I will thank you all personally when I write the full report. Time to take a steady drive home with the Joel Robert trophy tucked away”, Dave Garland the team manager stated on social media.

After a disappointing RedBud MXoN display for Team GB it’s nice to see them secure some success at the Coupe de l’Avenir.