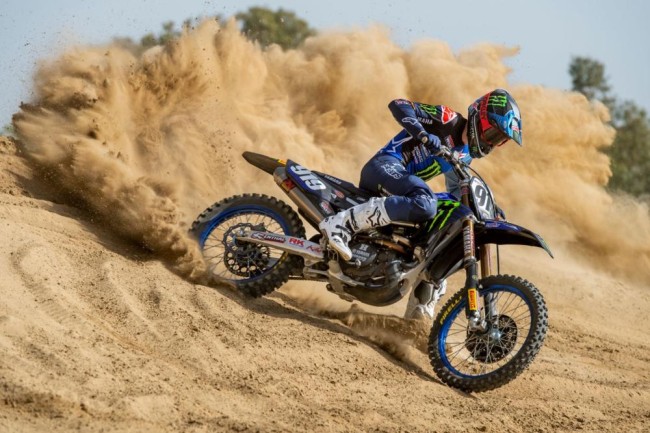 The second round of the British championship at Lyng was memorable – especially if your name is Ben Watson! There isn’t many that can make their 450 factory debut and go toe-to-toe with the man most people still regard as the fastest man on the planet, Jeffrey Herlings, but Watson did just that!

And it was the way he did it that was impressive. Watson was assertive in both races getting to the front and setting the pace, not once did he look worried or intimidated by the presence of Herlings even when the Dutchman caught him. Watson never gave in, believed in himself and even stayed on Herlings rear wheel in race two pushing the four-time world champ all the way.

The fans were key too, with 4,000 vociferous voices and waving arms hanging over the fence, cheering Britain’s new superstar of motocross. And the presence of the fans was not lost on Watson either:”That was a fun day! 1-2 in the races. Big thanks to my team for all the hard work…my bike was amazing today. And I appreciate every single one of you on the sidelines, your support was on another level, seriously missed having you all at the races.”

It wasn’t just Watson’s speed that was impressive however, it was how good he looked on the bike. He never looked on the ragged edge, he was confident, smooth and flowing even under big pressure from Herlings, frankly he looks completely at home and at ease on the 450, like he was born to ride it. Ever since he won a GP at the end of last season the self-belief of Watson has soared, it seems he truly understands just how good he is and he expects to be a front runner and moving up to the 450s, that belief seems to have continued.

Of course the world championship will be a different ball game, there are 15-20 riders on a similar pace so it is going to be much higher level than the British series, but Watson has proven his speed is where it needs to be and on the level of the factory stars. And he has shown he is now the pre-eminent rider from the UK, the new blood is here and Watson is leading the way.

Hot on his heels is Conrad Mewse. The duo were a similar pace in many races last season in MX2 but with Mewse staying on the 250 machine this year, he has all the focus and hopes from the UK media and fans in the 2021 MX2 world championship.

And, with how well he rode and at Culham and then blitzing everyone at Lyng by 30 seconds, Mewse showed again just what an amazing talent he is on a bike; inventing lines, jumping braking bumps and showing some stupendous corner speed. Mewse’ consistency improved dramatically last year in the world championship that saw him take home a strong eighth in the series but I’m the British championship this year he has shown again that when he is on form, Mewse has world class speed that should see him contending for podium and even wins this season at world level.

They were once the future but now Conrad Mewse and Ben Watson are the present superstars of British motocross and their performances at Lyng underlined just why they have been held in such high regard for so many years in the UK. This is their time.