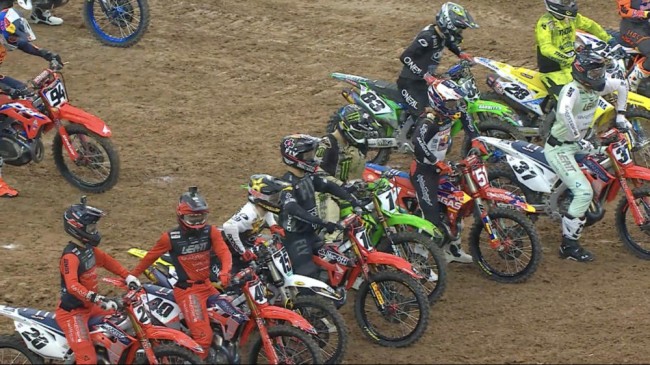 Ken Roczen made it look easy in Q1, perhaps motivated by losing the points lead and his penalty, going fastest by half a second over Zach Osborne, with Adam Cianciarulo on the pace again in third.

“I just try and take it corner by corner,” said Roczen .”It’s rutted, it’s super soft – just trying to have fun out there. For now I felt really solid out there.”

In the 250 class Christian Craig went fastest over Jett Lawrence but the big story was Austin Forkner walking off the track holding his arm after a crash at the beginning of the session, as it looks like another title challenge has been ruined by injury for Forkner in his fifth year in the class. RJ Hampshire didn’t even make it to the first qualifying session after a crash in free practice.

Craig said: “It’s still like Velcro, this track is awesome tonight especially compared to the first two rounds this is a legit supercross track.