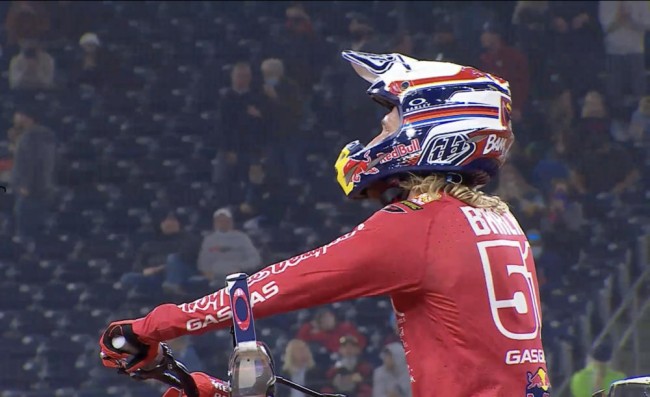 Justin Barcia made history in Houston winning the first supercross race ever for Gas Gas at their first attempt – and it was Barcia’s third win a tthe opener in row!

Barcia said: “I got a great start and rode my own race, Kenny pressured me really hard but I held it together. That was an insane race. I want to be in the fight all year not just a one hit wonder.”

Barcia rode a brilliant race after taking the holeshot in a tight squeeze with Marvin Musquin out of turn one. From there Barcia had to hold of a superb Ken Roczen who looked so smooth on the new Honda and maybe the best he has looked since his injury. Ken made a couple of moves on Barcia but didn’t want to make contact and backed off just enough to allow Barcia to keep the lead and eventually a huge win.

Marvin Musqin rode a great race for third to pass Cianciarulo back and underline his return to supercross and show he has lost none of his speed and skill. But it was a disaster for Eli Tomac, the defending champ clashed with Vince Friese twice and ended up 13th with Zach Osborne coming from a first turn crash to pass Eli and reach the top ten just behind Cooper Webb who didn’t have his best race in ninth.

Christian Craig dominated the 250 main event checking out once he got around RJ Hampshire. The battle for second was won by Austin Forkner with Hampshire going down trying to hold off Lawrence and Nicholls for third, then Jett Lawrence went down himself on the last lap while fourth to to end up finishing a disappointing sixth.

“If only people knew what I’ve been through these last two years, this is the most weight lifted off my shoulders. I’ve been to the lowest of lows, so many people wrote me off but I kept driving,” said a very emotional Craig on his first win in five years.