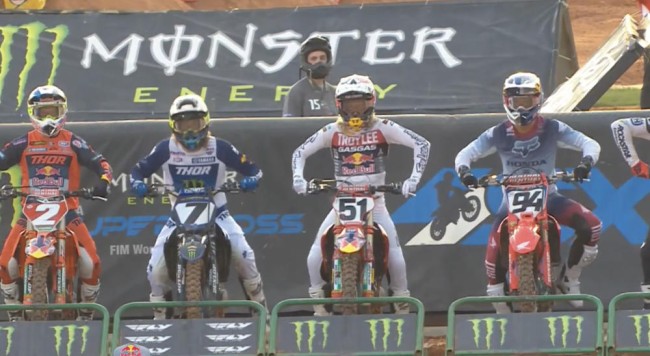 Ken Roczen rode the perfect race in Atlanta to lead from start to finish even surviving an aggressive pass attempt by Webb who started second in the first couple of turns.

But from there Webb didn’t have the pace, especially in the whoops, and dropped back to fifth before finding a line and upping his pace to re-catch Justin Barcia in fourth. But Webb got a little desperate running into the back of Barcia on the wall jump and tipped over allowing Tomac by with Webb finishing a frustrating sixth and now Roczen is back in the title fight 13 points down with three rounds to go. It was Webb’s worst result since the first round of the season in Houston.

Roczen, in what might have been his most impressive performance of the year, said: “Obviously the last race wasn’t good for me at all. One thing I do is kick myself in the ass after the race. It ain’t over till the fat lady sings.”

Jason Anderson took third after getting landed on in his heat and having to come through the LCQ in yet another come from behind ride.

Justin Cooper took a dominating win in the 250 class to extend his points lead but the big story was his title rival, Cameron McAdoo.

The Pro Circuit Kawasaki rider flipped himself up unto a table-top after an endo over a double in a spectacular crash. The race was red flagged with McAdoo stuck on the jump but, amazingly he was given the all-clear to race again!

McAdoo then almost got the holeshot then got his way into second before dropping BSB to third when a charging Hunter Lawrence surged pass in a great ride for the Aussie who came from outside the top five. Nate Thrasher showed he win was no fluke to take fourth right on the heels of McAdoo.

Cooper said it was an exhausting race with the heat and having a restart but was perplexed as to why McAdoo was allowed to race.

McAdoo said he had a contusion on his thigh, and a bent up bent up bike but was very happy to make the podium to keep his championship hopes alive just nine points behind Cooper.