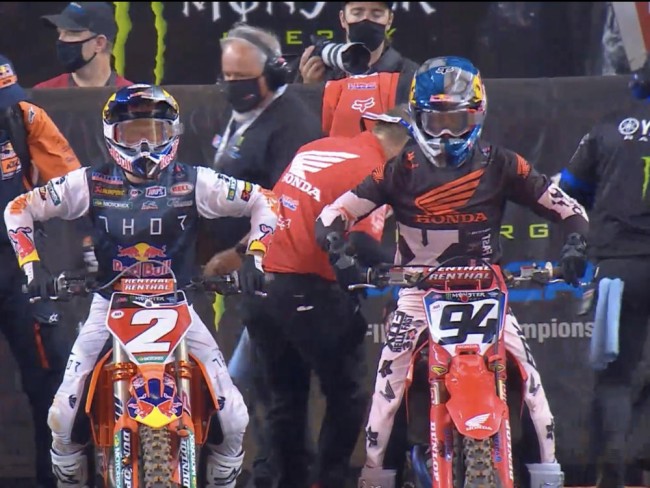 Somehow, some way, Cooper Webb won again to make it a clean sweep at Arlington despite a bad day and getting knocked down in the heat race to increase his lead to 15 points in the championship battle. Webb didn’t even get out of the gate well in the main event at Arlington 3 but went inside and came out of turn one in second behind arch-rival Roczen.

Roczen quickly pulled away to nearly a two second gap with Webb having Tomac and Barcia right on his tail. Webb then got his rhythm and inched up a bit on Roczen, but Tomac was right on the rear wheel of Webb trying to set up a pass until he rode into a tuff block and lost a spot to Barcia!

That gave Webb the space to pressure Roczen and with time winding down Webb made his move, Roczen countered but Webb passed him again around the outside in the whoops, if Roczen wanted to punt Webb like McGrath said he should, this was the time, but Roczen rolled off the throttle and Webb took the lead and an brilliant win under pressure.

Webb said: “That was a crazy race that’s for sure. Kenny was laying it down, he had really good speed. Eli was all over me. I just focused on being consistent. I rode terrible in the heat race and didn’t like being put on the ground, that fired me up. Man, I’m just pumped!”

Roczen, now 15 points behind with five round to go said: “ It was an awesome race, it was tough, I was leading and those guys were behind me. It just wasn’t enough. I’m giving it everything I’ve got out there, that’s all I can do.”

Justin Cooper got his second race win of the season to take back the red plate with a start to finish victory in the 250 West division. The top four in the points got out 1-2-3-4 with Cooper, leading McAdoo, Lawrence and Marchbanks. Cooper, McAdoo and Lawrence were about two seconds apart each until five minutes to go but by then Marchbanks, who was following Lawrence, had went down costing himself valuable points.

Into the final five minutes and Cooper began to pull away from McAdoo, increasing his gap to over five seconds and then Lawrence, seemingly safe in third, over jumped into the corner and ended up in the net over the berm, to come home fifth and dropping three potentially crucial championship points. Lawrence’s mistake allows Seth Hammaker to take third and good bounce back ride from a tough night in Tuesday.