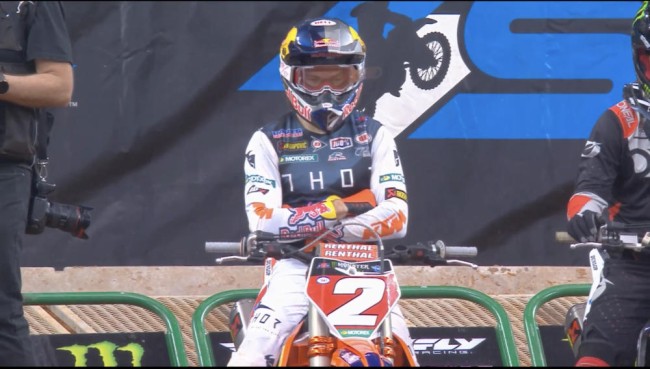 This was as straight up as it gets. Cooper Webb led Eli Tomac and Ken Roczen out of turn one in the main event as the top three in the championship got the starts they needed to make their championship ambitions happen.

The trio quickly pulled away from the rest of the field such was the title motivation. Webb was initially a bit shaky in the whoops, but as the race went on Roczen started to lose ground and, just when it looked like Tomac was getting ready to go for the pass, he lost traction going into the whoops and lost the wheel of Webb. From there Webb pulled away to huge win as he takes a stranglehold on this 2021 title.

Webb, who now has a 12 point lead over Roczen, said: “That was a huge confidence effort booster for me to lead the whole race with that amount of pressure, Eli was maybe the fastest guy but I picked up on what he was doing and that maybe saved me. To lead wire to wire, that’s awesome.”

Roczen said: “All I care about is keeping that dream alive, we got on the podium. I’m trying to see the positives. I wasn’t good enough, those guys were better.”

Justin Barcia suffered a bad start but rode well to get back to fourth but by the time he got there the front three were long gone.

In the 250 class Hunter Lawrence took the first supercross win of his career to banish two years of injury frustration to show that he has the indoor skillls to match younger brother, Jett.

It took just six supercross races for Hunter to rise to the top and get the win to remind everyone of the talent that he showed in the MX2 world championship, the series where he really made his name and helped him get the ride in the USA. Lawrence made a fantastic two for one pass to take the lead to get by Swoll and race leader Harrison who were locked in their own duel for the lead when Lawrence zapped by before checking out on the field and looking smooth doing so.

Hunter said: “As soon as I crossed the finish line, I couldn’t stop it (emotion). I was at rock bottom, at Loretta Lynn’s I said to my dad, I quit. I couldn’t take the heart break anymore. This is incredible.”

Jalek Swoll took a brilliant second place for his first podium of his career with Kyle Peters back from Arenacross in third.

Justin Cooper crashed on the lap one but then Cameron McAdoo crashed a few laps later and rejoined just behind his rival with the duo working their way up to fifth and seventh place respectively. McAdoo then got docked three spots for cutting the track which means Hunter Lawrence now leads the championship.