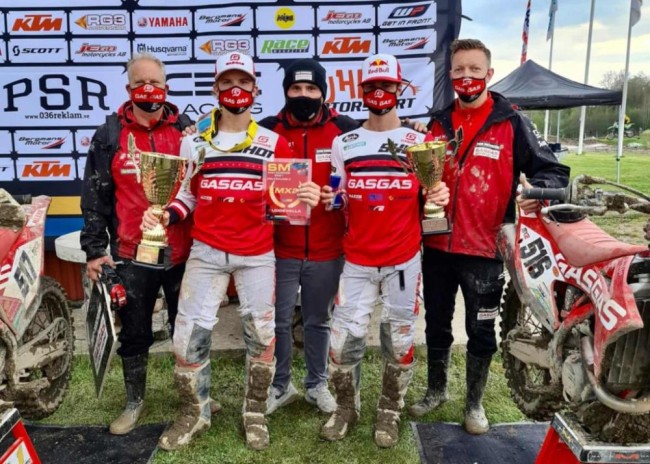 The second event of the Swedish championship last weekend took place in Uddevalla, about an hour’s drive north of Gothenburg. The Grand Prix track was excellently prepared, but the heavy rain during the night from Friday to Saturday turned the track into an almost one-lane and very challenging track.

Despite the relatively poor starting position, Isak Gifting managed to be one of the first to turn into the first corner. Simon Längenfelder was also at the front, but in the course of the race Simon had a problem with his glasses and lost some places due to the limited visibility. In the end Simon finished in sixth place. Isak was able to take second place on lap two and defended it to the finish.

In the second race both DIGA Procross GASGAS Factory athletes were again in the leading group. Simon was able to defend his second place until the third last lap and finished the race in third place. Isak fell back to sixth place after a mistake in lap three and still managed to finish fifth on the muddy and rutted track.

In the day’s standings, Isak Gifting and Simon Längenfelder finished fourth and fifth, narrowly missing out on the podium.

On Sunday morning Isak Gifting set the fastest lap time in qualifying and was the first to choose his starting position. Simon Längenfelder finished fourth in the combined timesheet.

After his holeshot, Isak Gifting was able to defend his lead in the first heat until the ninth lap, but then had to let a competitor pass and settle for second place. Simon Längenfelder came back from the first round in fifth position and managed to secure third place on the last lap.

Isak Gifting: “I am super happy with the weekend and the victory today. We can take a lot of positives, we improved qualifying and my starts were very good. I feel ready and looking forward to the start of the MXGP season.”

Simon Längenfelder: “All in all I am very happy with the weekend. I was able to deliver two very good qualifying sessions and increase my race speed from race to race. I would have loved to take the stage win on Sunday, but despite a small mistake and a penalty, I’m still happy to be on the podium.”

Justin Amian – Team Owner and Manger: “I am glad that our athletes had the opportunity to prepare for the MXGP season under race conditions this weekend in Uddevalla. Both athletes did a very good job and proved their skills under difficult conditions. We are looking forward to the start of the MXGP season.”