Simpson on Lyng: We need to work more on our out-and-out speed for qualifying 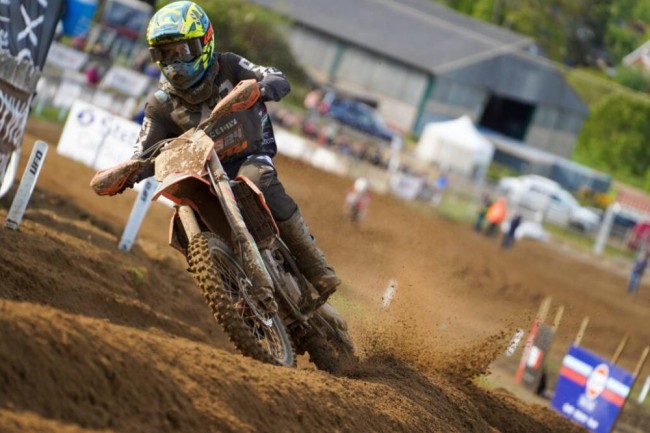 A top six finish at Lyng for round two of the ACU British Championship was another step towards full race season prep for Shaun.

Lyng welcomed a decent crowd and provided a rough but narrow and limited racetrack for the second date in the national series. Shaun took the SS24 KTM MXGP set-up to Norfolk and the Cadders Hill venue for his second meeting of 2021; the next chapter in his recovery in topflight competition after almost a year away from a start gate.

Although he struggled to refine the set-up of the 450 SX-F for the circuit near Norwich, Shaun was able to recover to 7th in the first moto after a mistake left him deep in the pack. A better second sprint saw #24 charging through to 4th. He’s now 6th in the standings and is eying yet more race time in Doncaster and the MX Nationals next week. Shaun also needs to return to his training base in Belgium this week to organise transportation to Orlyonok for the Grand Prix of Russia in three weeks time.

“Similar to Culham to be honest but a much better second race,” Shaun said. “I just couldn’t get comfy on the track and with the bike. It was very one-lined and it cut-up pretty good but wasn’t great for racing. I didn’t get the starts I wanted and a crash on the first lap of the first moto meant I had a lot of work to do. I came through to finish 7th. In the second I charged the whole moto even though I wasn’t happy with the set-up and managed 4th for 6th overall.“

“It’s hard to see the positives but I am feeling much more upbeat than I did after round one. We know where we still have to work and I think we’ll race next weekend at FatCats for the MX Nationals to keep up the pace and hopefully make some more progress. We’ve done a lot of practicing and riding and have been feeling great but it hasn’t come together at the races yet. We need to work more on our out-and-out speed for qualifying laps but it’s coming.”