Sexton, Nichols and Lawrence on A1 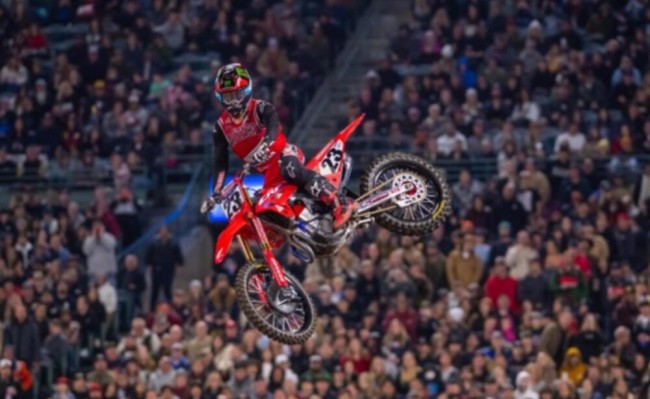 On a treacherous track in a packed Angel Stadium of Anaheim, Team Honda HRC enjoyed a strong start to the 2023 AMA Supercross season. For Jett Lawrence, a convincing 250 victory was a promising start to his bid for a West title to go along with last year’s East crown; for Chase Sexton, a safe third-place finish in a dramatic 450 main showed that he’s capable of minimizing errors in perilous scenarios; and for Colt Nichols, a sixth-place ride was a respectable performance in his first race aboard 450 machinery.

Lawrence rode nearly flawlessly in the 250 West main event, taking the holeshot and leading every lap, but the 450 main was much more dramatic. Nichols nailed the holeshot aboard his CRF450RWE, but an early bobble caused him to be overtaken by several riders, including teammate Sexton, who sat fifth in the early going. The Illinois native’s patient riding was rewarded when he profited from mistakes by other riders, and an aggressive lap-12 pass on Malcolm Stewart put him into the lead. Sexton’s momentum slowed during the race’s latter stages, and was overtaken by Eli Tomac and Cooper Webb, though he still finished just 4.35 seconds off the winning time.

Sexton: Anaheim 1 was one of the gnarliest tracks I’ve been on. It was really hard to jump into and be consistent and perfect throughout the whole main event. Being back in a race setting was good. I’m pretty comfortable on my bike; I think we made some good steps in the right direction, and I felt safe and stable in the whoops all night.

Nichols: It was a little chaotic throughout the day, but things came around. I started out making it through the heat race unscathed. I went into the main and got a really good start and kind of fumbled the first little straightaway and went from first to like sixth. [laughs] I didn’t quite have the intensity the first maybe 10 minutes, and the front group got away a little bit–I was riding in no-man’s land. Overall though, I’m really happy. We got through it, which is all I really wanted to do, and I’ve got something to build on now. I’m excited for next weekend

Lawrence: It’s always nervous coming into the first one because you don’t know where everyone’s at. The big thing was how the track was going to form up for the main, and after practice, the joke was, ‘I just want to see Sunday!’ [laughs] I had a bit of a rough one in the heat race, so I just focused on the main and making sure I did what I needed to do. I’m thankful I came out of here in one piece.

Lars Lindstrom: That was a really good Anaheim 1 for the team, with two guys on the podium, and I’m really proud of Colt Nichols for finishing sixth in his first 450 race. Jett had struggled a little bit during the day with being consistent, but in the main event he just executed and rode a super-clean race–the cleanest he had ridden all day, hitting all the rhythms incredibly clean for a fantastic win. The track was extremely rough and rutted, and Chase probably needed to adapt to the track a little bit better, but to come away from Anaheim 1 with a podium is a success in my book. I’m really stoked on the team and ready to get to the ‘normal’ races now–glad to get A1 out of the way.