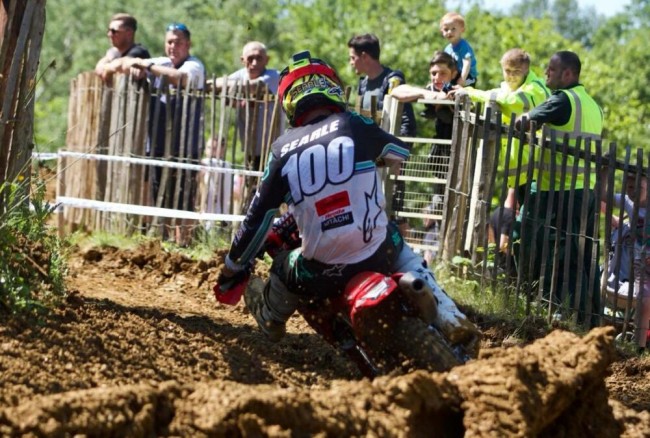 Tommy Searle rode with his head all day to go 2-4 at Landrake to clinch the 2022 MX1 British championship. Searle holeshot both motos which gave hime margin for error and after a second in race one. once Mewse hit the deck, he only needed eighth or better in race two for the title.

Surrounded by Crescent Yamahas on the starting gate, Searle still took the holeshot but once Gilber passed a few laps in, he went into race management mode and let Kullas and Mewse by as well, not wanting to take any risks. From there, with the field stretched out thanks to his early pace, Searle rode steady in fourth just ahead of Shaun Simpson to clinch his third British MX1 title in a row and now has thr MXoN for team GB at Red Bud to look forward too.

Speaking after the rac Searle, clad in a number one shirt, said: “At first in the race I was really enjoying it, i got two holeshots which is really good. Starts have been great and the bikes been great all year and it was again today. This week I was a little bit nervous and I don’t normally get nervous but when I was on track i felt good all day. I would have liked to have won a race, I was happy up front then they came past sort of in a train, pushing, so I wasn’t going to get involved i was just happy, and just did what I needed to do.

“On the day it has been quite easy, I worried in the week about what could happen and where I could finish and this and that but it never goes how you think and the first race I finished second and that gave me a good points gap that I could ride round in the second race. I know my speed on this track is good, I think if i needed to, I could have fought for the win. But I just done what I needed. I was sort of worried, I would hear a little noise on the bike and think, oohh, but I was confident in myself and then I started worrying a little bit. Thanks to the Honda team they have been great for past three years, it’s not easy, I’m getting older!

And on MXoN Searle said: “Now this is out of the way i can look forward to that. I am going to go to Jake Nicholls house this weekbecuase his track is similar to to Red Bud. Makle some changes on the bike, go a little bit stiffer for the track out there and hopefully I can put my best foot foward and do great now for team GB.”