Searle on Blaxhall: It wasn’t the best day 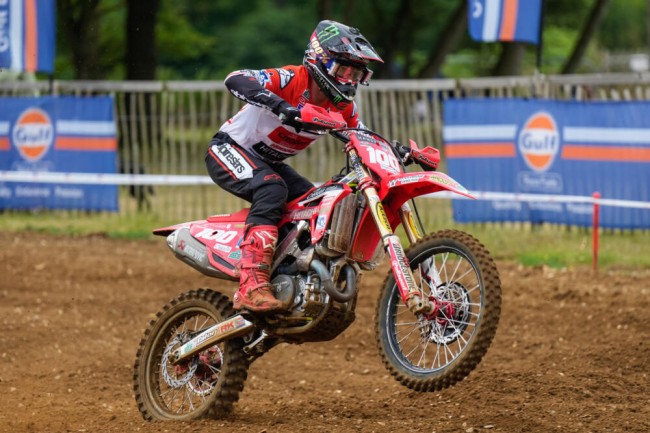 Tommy Searle’s 100% record of finishing on the MX1 podium continued at Sunday’s ACU British Motocross championship round five at Blaxhall in Suffolk. The Crendon Fastrack Honda rider took a solid third overall to retain the red plate as championship leader.

The 33-year-old and current British champion has won six motos this year, with two double wins and now has a 13-point lead with just three rounds remaining.

Searle didn’t get the best of starts in the opening moto, but ended up in fifth place by the end of the first lap after battling past some of his rivals. But this allowed leaders Harri Kullas and Shaun Simpson to make a break. Searle caught and passed Jake Millward for fourth then set his sights on third place man Josh Gilbert. Searle tried hard but couldn’t get by and took fourth.

The second moto saw Searle use the power of his Honda CRF450R to get a clear jump on the rest of field and take a stunning holeshot. He led the pack around on the opening lap, tailed by Simpson and Kullas. Simpson managed to get through so Searle battled to keep Kullas at bay. The Estonian managed to get the better of the Brit so Searle came home third, taking the final step on the podium to retain the lead in the series.

Searle said: “It wasn’t the best day for me. I knew it was going to be tough as we had a lot of rain and the track was deeper than normal, so a fourth and third was all I had.

“I did get a good start in second race, and had a few good laps but and Shaun was pushing on and came by. I knew I had to back off a little bit as I was struggling more than I should be. Harri was behind me and I know he was riding well today, so I backed off a bit to hold him up so he couldn’t put a push on and catch Shaun.

“I did what I could to try to lose as few points as possible, so I got third overall and I live to fight another day.”

For the team’s Jay Hague, it was a return to racing after recovering from an injury that has kept him off the Crendon Fastrack Honda CRF250R until this week. Although he’s not 100% race ready, he proved he had the speed to challenge for a podium place as he took fifth in qualifying. But two bad starts, ruined by other riders, saw him having to come through the pack both times.

In the first race he rounded the first lap in 15th place then got into a rhythm and moved consistently forward to a solid eighth spot. But in race two he had to slam on the brakes on the start straight to avoid two riders who clashed, then as he entered the first corner he was brought down. He remounted with a damaged brake and ended lap one in 34th place. Despite the damaged bike, he picked off 14 rivals to end up 20th for 13th overall.

Hague said: “I’m happy to be back racing but ended the event disappointed as my day was ruined by two bad starts. In the first race I came through well but in the second, I was caught up in a pile-up in the first corner and after that had no brake. I just kept on going as best I could because it’s vital to get more track time under my belt.

“I’ve only managed to ride three times since I got hurt so I’m not at my best yet. And at least when I crashed it was the bike that got damaged rather than me.”

Team manager, triple 500 world champion Dave Thorpe, said: “Tommy is still a bit under the weather so today was a mature performance. The sign of a true champion is being able to get through days when you are not at your best, and still come away with very good results. And that’s just what Tommy did with third place and to keep the lead in the series.

“And it was great to have Jay back in the team after injury and gaining confidence again. He had bad luck off the starts but was riding well as he came through in both races, so it’s something to build on as he gets back up to the results we know he’s capable of.”