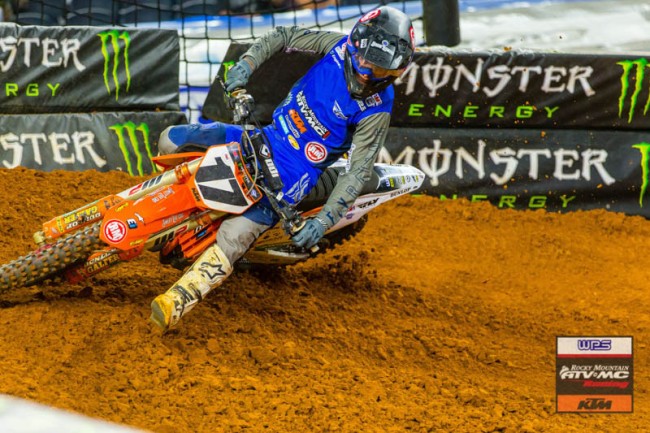 Team Rocky Mountain ATV/MC-KTM-WPS made its last appearance at AT&T Stadium as round 12 of the 2021 Monster Energy Supercross series ended a three-race stay in Arlington, TX. Team rider Joey Savatgy used a strong start in the main event to finish the night with a top-10 finish.

Joey Savatgy launched out of the gate in 450 Heat 1 and positioned himself inside the top 10 early. He soon found himself in a battle for position that lasted for over half the race, but Joey took the upper hand to move into the top 5. The Gear Off-Road supported rider’s charge landed him 5th place at the checkered flag, advancing him to the main event.

His main event start mirrored his heat race start as he slotted himself into 7th place early in the race. He kept his momentum moving forward as he started reeling in the riders in front. After a late-race battle, Joey earned his fourth top-10 ride as he crossed the finish in 8th place.

Joey Savatgy: “I am happy with my ride tonight. My starts were there all night and I had the pace to finish inside the top ten. We’ll take the break to regroup and come back ready for another top ten ride in Atlanta”

Justin Bogle would not ride due to an unfortunate crash during the first qualifying session that resulted in a bruised lung and chest, along with a banged-up shoulder. Taking advantage of the upcoming break, Justin headed back home to Oklahoma to get checked out by his primary doctor this week. Both Justin and the Team will assess how he is feeling in a few days, and prepare for Atlanta accordingly.

The team now will take a two-week break before heading to Atlanta Motor Speedway for rounds 13, 14, and 15 of the 2021 Monster Energy Supercross Series.