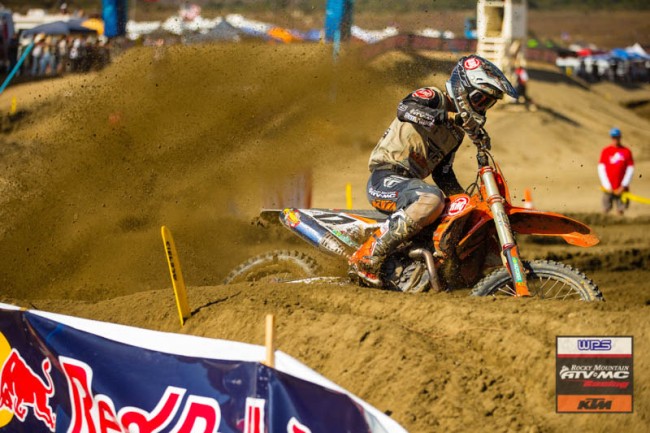 The first gate drop of the outdoor season happened this past Saturday as Team Rocky Mountain ATV/MC-KTM-WPS visited Pala MX in Southern California for round 1 of the 2021 Lucas Oil Pro Motocross Championship. With a large crowd cheering the riders on, Joey Savatgy rode to 14th overall, while Justin Bogle made his return to racing with a solid ride to 18th overall.

Joey Savatgy launched out of the gate in Moto 1, had moved to just out of the top 10 by the end of the first lap. He fought hard to move forward and found himself pressuring and passing the defending outdoor champion, Zach Osborne, late in the race. He kept that momentum to finish Moto 1 in 12th place. After that solid ride in the first moto, Joey did not have the ride he wanted in the second. After starting inside the top 10, he went down early in the race. After remounting at the tail end of the pack, he put on a charge and worked his way to just outside the top fifteen. Joey would go down for a second time late in the race while trying to make a pass into 16th. He recovered and fight back to 18th place by the checkered flag, earning 14th overall for the day.

“Today was far from ideal. The track was tough today and while my speed was there, I just made a few mistakes that kept me from a solid finish. It’s a long season and we will make a few adjustments and come out firing at Thunder Valley.” – Joey Savatgy.

Justin Bogle powered off the gate in Moto 1, fighting inside the top 15 for the first half of the race. He fell off the pace late in the race, however, and finished 26th. He bounced back in Moto 2 as another good start put him in position inside the top 20. With the track at its roughest, the FMF Racing supported rider dug deep and powered through the moto to finish 16th at the checkered flag and earn 18th overall for the day.

“It was a tough one today. I’ve only been on the bike a few weeks since my injury from Supercross. We have some work to do, just thankful for my team who’s behind me. We’ll head home and test this week so we can charge at Thunder Valley.”- Justin Bogle.