Roczen, Sexton and the Lawrence brothers on Pala 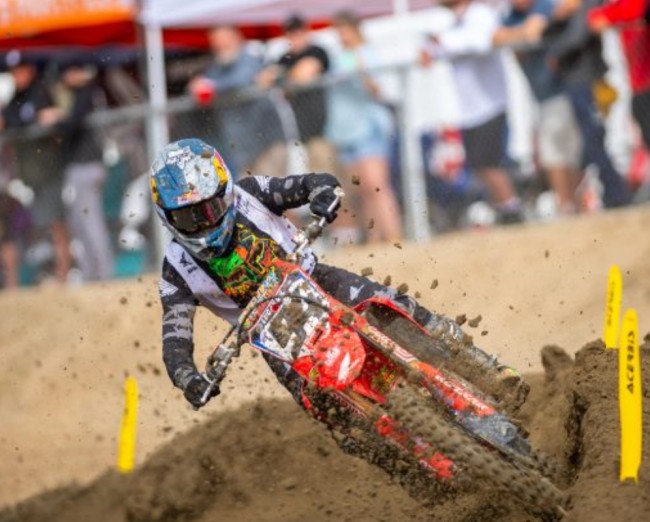 The first 250 moto at the North San Diego County venue saw Jett Lawrence suffer a poor start and complete lap one in 17th place, but he made his way through the pack to eventually finish second, while brother Hunter struggled with rear traction and finished sixth. Jett got a much better start in the second moto, and he quickly advanced from fourth, taking the lead on lap seven of 15. From there, the young Australian pulled ahead, ultimately winning by nearly seven seconds, while Hunter finished fifth.

Sexton completed lap one of the first 450 moto in fifth place and moved toward the front, securing second at the race’s midway point. Toward the end of the 30-minute-plus-two-laps moto, he closed on the leading Dylan Ferrandis, eventually finishing less than a tenth of a second back. Unfortunately, a first-turn moto 2 crash forced the Illinois native to charge through the pack for a 10th place finish, good for fifth overall. Roczen had been a little uncomfortable in the first moto, finishing sixth, but the German came out strong in moto 2, taking the lead on lap one and holding strong to win by nearly 12 seconds, earning second overall.

Ken Roczen: My first outdoor race at Fox Raceway ended up being really good. I felt a little rusty riding motocross in general, and I rode a little bit tight in the first moto but could salvage a sixth-place finish. Then I got a good start in the second moto and just rode really well to get my first moto win of the year, which is amazing. I ended up being second overall, and I hope to build each and every weekend from here on out. The class is really stacked, so it’ll be a tough season, but we’re ready to give it our all. We’ll continue working to see if we can get the bike working a little better for me as well, and I’m looking forward to Colorado.”

Chase Sexton: ‘Round 1 at Pala for me didn’t start off the greatest. I had a rough time in practice, just finding a flow with the track and the bike. I turned it around in the first moto when I got a pretty good start. I kind of went backwards a little bit and then found my groove and charged forward. I made a good push towards the end and got close to Dylan [Ferrandis] but couldn’t quite make it happen. In the second moto I went down on the start and from there it was an uphill battle, just trying to do as much damage control as possible. I got back to 10th and am looking forward to Thunder Valley.”

Hunter Lawrence: “It was a rough weekend. To start off with two crashes in each moto wasn’t ideal, but we live and learn. I’m looking forward to next weekend, just to be able to be better and not make those mistakes. I’m happy to get the season started nonetheless. Sixth overall is a start—nothing to jump up and down about, but I’m happy to be fit and healthy.”

Jett Lawrence: “My start in the first moto didn’t give me good hopes of a podium, but I ended up carving my way through into third; then [Max] Vohland had some bad luck with a bike malfunction so I ended up going into second. I could see Jeremy [Martin] up there so I kind of put in a little bit of a charge, but I didn’t want to overdo it and make a silly mistake like I used to. In the second moto I think I was eighth or something on the start. I made my way into third, and it took me a while to figure out what the two Star boys were doing out front; they were really on it. J-Mart made a mistake and I was able to get close enough to watch what he was doing and got a pass done a few laps after that. I set my eyes on [Justin] Cooper and caught him fairly quickly; I think he might have made a mistake, but I got the pass done, which was really good. It was really square-edged and technical today, so it kind of helped me a little bit, but I felt really good; I felt like if it was at any other track it would’ve been the same. I felt really strong because I’ve been putting the work in. I’m glad to see that’s paying off, and I can’t wait for next weekend, to maybe do something similar.”

Erik Kehoe: “The team worked hard in preparation for the start of the MX series, and the effort paid off. Jett had an amazing win in the 250 class and Hunter rode strong all day for a great start to the series. Chase was fast all day and finished a strong second in 450 moto 1. Unfortunately, a first-turn crash in moto 2 had him charging hard through the pack all the way to 10th in the moto and fifth overall. Ken rode a little tight in the first 450 moto, but came out strong in moto 2. He took the lead on lap 1 and held strong for the moto win and second on the day.”