Roczen on his win, Lawrence on disappointment 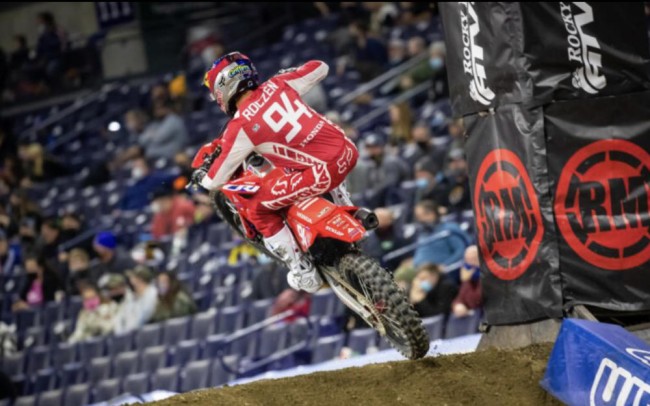 On Tuesday evening in Indianapolis’s Lucas Oil Stadium, Ken Roczen became the first rider in the 2021 AMA Supercross series to score wins in two 450SX main events, winning in the Circle City for the second time in just over three days. Whereas last Saturday’s win was a close one, this time the Team Honda HRC rider was untouchable aboard his CRF450R, setting the fastest lap in qualifying, topping his heat race and then leading all 26 laps in the main. Along the way, he was the only rider to dip into the 46-second lap zone, growing his advantage to well over 11 seconds before eventually reaching the checkered flag with a winning margin of nearly eight seconds. The performance grew the 26-year-old German’s lead in the title chase to 13 points.

Despite showing his usual impressive speed in the 250SX East class, Jett Lawrence had an unfortunate evening, suffering a number of crashes, including a big one in his heat race. The Australian bravely lined up for the Last Chance Qualifier and won, but subsequently opted to sit out the main event with a painful right shoulder. The top-finishing Red Rider was TiLube/Storm Lake Honda’s Grant Harlan, in fifth.

Ken Roczen: ““I don’t know what to say; it was a picture-perfect night, with pole position in practice, winning my heat race, then I just had a really amazing main event. I grabbed a really good start and was in second, made the pass happen early and just checked out; it was an amazing race for me. I flowed nicely with the track, put a little gap in between me and the other guys and just enjoyed my race–stayed focused and brought it home. I’m just thankful to be in this position. I’m going to continue leaving everything on the track and keep thriving the way I am right now. I’m going to enjoy this today and tomorrow, then come back like nothing ever happened and try again on Saturday.”

Jett Lawrence: “The day started off pretty good; the track was fun and the boys did good track prep. It was looking good, but unfortunately I had a crash in the second qualifying session. I didn’t really hurt myself much, just had a bloody nose. I hit a Tuff Block that was in a bad spot, and it was put back in the same spot for the heat race. I hit it straight on and fell straight on my head and shoulder. I was looked at by my therapist and there might be a little bit of separation, but we’re just going to play it by ear. Hopefully I get better so I can ride this Saturday, but we’ll have to wait and see. It’s not really how I wanted the night to end, but it happened and now I’m going to focus on getting better for this weekend or Orlando.”

Erik Kehoe: “It was a solid night for Ken. He’s shown a very calm demeanor and his confidence is building. I believe this is just another step towards meeting his goals every week. Unfortunately, it was a difficult evening for Jett and he’s still gaining experience. He’s going to learn from tonight. It was a tough call for him to hit the ground so hard twice and then go out to win the LCQ while feeling the effects of his crashes and then decide that he was too sore and not strong enough to ride that main event. He made the right choice.”