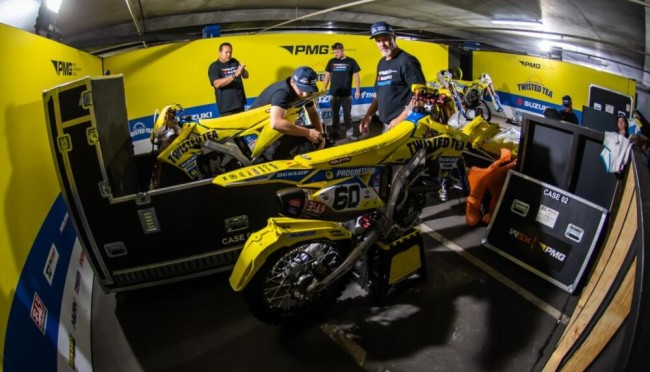 Max Anstie’s former team, HEP Suzuki, are, according to Steve Matthes at Pulp MX, making a “big push” for Ken Roczen to return to yellow!

The German of course was a teenage star in MX2 winning his first GP at just 15 on a Suzuki before moving to KTM to win his MX2 world title. Roczen of course went back to Suzuki in AMA competition and won the 450 AMA motocross series on yellow in a team owned by Carmichael and Carey Hart.

But with a bike that still a kickstart ( a new bike is rumoured to be coming soon) and a team that hasn’t a history of winning it would be quite the catch for HEP Suzuki to capture a star shining as brightly as Ken Roczen still is. HEP Suzuki do participate in the WSX series and it would mean getting the defending champ for 2023 if Roczen raced WSX next season. But with the team wearing Thor and sponsored by Twisted Tea, there will have to be negotiations with Roczen aligned with FOX and Red Bull for his whole career and very much still advertising both brands.

Roczen has already been linked to a Kawasaki with help from Mitch Payton and Roczen was even posting footage of himself on a 2023 450 Yamaha at Club MX with the rumoured option of going blue possible with help from Red Bull and logistical assistence from Club MX.

Roczen, who spoke with Jason Weigandt while he was riding the Yamaha at Club MX said he still had nothing signed: “I have no deal signed, everything is open. I also got to start somewhere, I can’t fast forward time – maybe in two, three or four weeks I know what I’m doing.” Full interview with an open Roczen below:

After riding the latest and greatest Yamaha, that even had Eli Tomac excited for the new machine despite winning everything on the 2022 machine this year when he spoke to us in Cardiff, “the first thing you will notice right away is the weight of it, it’s a lot lighter, you feel that just leaning left to right, getting into a rut, starting a turn, it is so much more manourveable but it’s not unstable, I think people are really going to like it.” Could Roczen really return to Suzuki and a kick-start?

It’s fascinating times for the super-talented and very marketable German who seems to be enjoying the freedom of seeing what’s out there – but he will be back on a Honda for the Paris supercross next weekend!