Roczen: He said he didn’t hear me 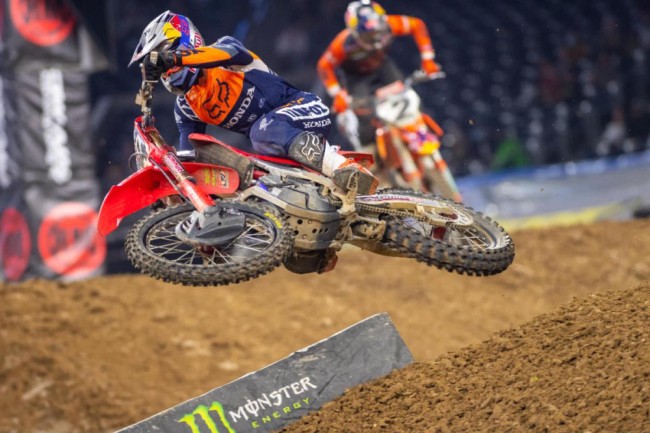 Ken Roczen says he is trying to move on from a tough last couple of rounds in Houston that saw the German lose eight points due to the red cross flag position and losing a win with the Dean Wilson debacle.

“I was basically bracing for the last five laps to battle, explained Rocen to the media after the race. “I had to try and lay with the track a little bit as well, as we ran into some lappers and stuff, I had to switch some line up. I was ready to give it everything towards the end again and obviously Dean being in front of me about three quarters of a lap he said he didn’t hear me but I’m sure there were blue flags around.

The reason I went to inside of the wall where I hit his back wheel. is because I literally thought on the straightway he was going to move over to let us by, after that it was 3/4 of a lap to go, and I was ready for anything, ready for action. But i hit the back of his wheel and almost crashed then I jumped double, double he ended up going super tight and I almost jumped into the back of him and had to manoeuvre around him then cooper was to the inside. The track today was super slight, a lot of it was slot car racing, I feel like if it wasn’t for the dean incident the night would have been mine tonight, but obviously it happened and move on.

On summation of the first three rounds the red plate holder said: “I feel pretty good. It was the same for everybody. We were dealing with a lot of traction here, a lot of different conditions that what we practice on especially me being I California, i wasn’t stressing about it by any means, we were main changes to the bike as well and something that helps with the stats and ultimately that’s what got the best of me in the second round was going around the first turn in 22d. So we got a lot better on that I as well would like to build on here and get better. I think we have got a lot in the tank. Going to Indy is kind of like going to round one, I do feel like I got robbed here a couple of times, and it’s a lot of valuable points left on the table for me but at the same time, I’m going to move past it, I have been working a lot on that and not going to let that phase me.”