Roczen and the Lawrence brothers on Salt Lake City 2 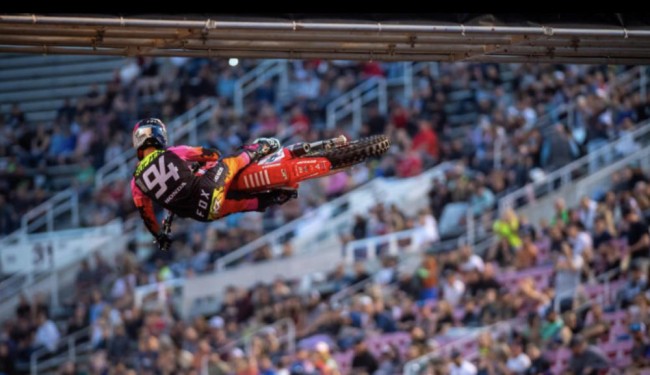 Team Honda HRC’s Jett Lawrence ended the dramatic 2021 AMA Supercross series with a stirring victory in the Dave Coombs Sr. 250SX East/West Showdown during the finale at Salt Lake City’s Rice-Eccles Stadium. The young Australian finished the season third in the 250SX East standings, while teammate and older brother Hunter Lawrence also performed well, taking third in the main and second overall in the 250SX West class. Meanwhile, the 450SX division saw Chase Sexton lead before notching his third podium result of the season. After vying for the premier-class title for much of the season, Ken Roczen–10th at the finale–ultimately settled for a respectable second in the final standings. It was a positive season for Team Honda HRC, which topped the final Manufacturer standings, based on total points in both 450SX and 250SX.

This was the fifth consecutive season that the 450SX class title came down to the final race, and when the gate dropped Roczen made strong passes that quickly put him at the front of the pack. After leading for eight of 29 laps, the German relinquished the lead to a charging Sexton and unfortunately fell back through the pack, eventually finishing 10th. With less than four minutes left on the clock, the rookie Sexton lost traction in a corner and was passed by Cooper Webb but still posted a solid third-place finish.

The highly anticipated 250SX East/West Showdown–which pitted riders from both regions against one another–saw the Lawrence brothers exploit their superior speed in the whoops, with Jett securing the lead on the 17th of 22 laps, after running third in the early going. Hunter was also on the move early on but tipped over while attempting a pass for third and lost two positions. Jett went on to secure his third win of the season, while Hunter recovered to finish third.

Ken Roczen: Round 17 was a tough one again. I just seemed to struggle with the altitude. After getting the holeshot in the main, the first little bit of the race looked promising, but I really let go and dropped way back. Overall, I’ve had a good season. I’ve never stayed in the game for so long—making it all the way to the last round being in the championship hunt. Last year I was third, this year I was second—at least we’re going in the right direction. We had some really good battles, and I learned a lot about myself this year. I’m looking forward to the outdoor season now, and the supercross season next year.”

Chase Sexton: “I started off really good and qualified first and was feeling good on the bike all day. In the heat race, I didn’t get the best start and rode in fifth and had a battle with [Justin] Barcia and those guys. In the main event, I came out and felt really good. I got a good start from being pretty far outside and then kind of just put my head down and did some pretty good laps. I could put it all on the track tonight and obviously got a little tired, but we got to put ourselves out there. I feel like we’re knocking on the door and I’m looking forward to supercross next year.”

Jett Lawrence: “Coming into the weekend, I was excited for the Showdown with my brother Hunter and couldn’t wait for the main event. In the first qualifier I got P1 and was feeling a little better on the track and started to get a good flow. The second qualifier was pretty good also; I had a little mistake in a rhythm lane but nothing crazy. Going into the heat race I was pretty excited to get it underway, and it went pretty good. I got second in the heat and ended up getting the third gate pick for the main. I was throwing up all through the break to the main, so I was a little nervous and didn’t know how I’d do, but I was able to dig deep and kind of focus and came out with a win. I was super-pumped from how I was feeling before the race, and to top it off Hunter got third; it was awesome for both of us to be on the box, so the last round ended pretty well, I think.”

Hunter Lawrence: Awesome weekend in Salt Lake City to finish off the season. I got P2 in the West class championship, so that was really cool; I’m stoked on that. I was pretty good throughout the day and was happy with qualifying and felt really good. In the main event I was in a really good position and just rushed a pass for third and washed the front end out. I dropped back to fifth and took a lap to regroup and breathe, and then put on a push and got myself into third on the last lap. The track wasn’t something you could really send it on, so it was definitely about patience and a lot of corner speed–you had to execute your corners really well. Obviously, Jett and myself both getting on the podium was really special. What a way to finish out the supercross season! The team and everyone was really happy with that, and I can’t thank the team enough; they’re like a family and they’ve been awesome, so I’m looking forward to the outdoors and just happy to end it on a solid note. Obviously we would’ve loved to win, but I’m looking forward to going racing again shortly.”