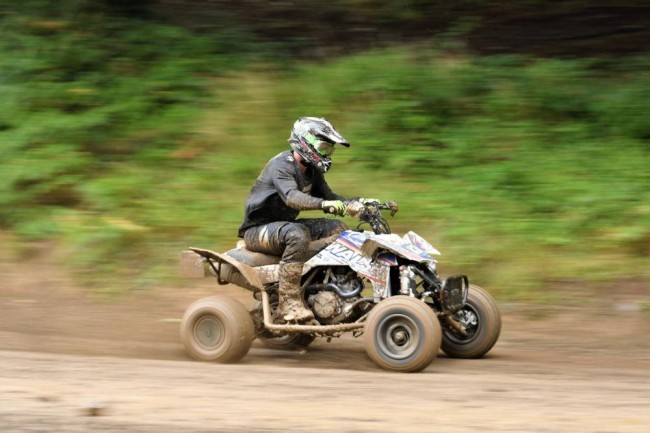 It was a very difficult day at Tinkerhill for the fifth round of the Ulster Quads and Sidecar championship as rain coming into the event made the track very wet and slippery. The day was actually cut short after torrential rain hit so after two blocks of racing it was decided enough was enough.

In the premier quads it was Dean Dillon who took the overall win as he went 2-1 on the day. Dillon has improved a lot this year and he’s finally secured his first overall win in the class he’s been chasing all year.

Mark McLernon who’s been the man to beat all year and comfortably leads the championship got his day off to a great start winning the opening moto. In race two he was content with third to bring home a solid second overall. Justin Reid ended up third overall as he had a consistent day finishing 3-2 in the moto’s.

Kevin Meenagh who was impressive at Tandragee had another good day at Tinkerhill in very different conditions to finish fourth overall.

In the semi-experts class it was Kyle Orr who took the win having the perfect day winning both moto’s.

Dean Young edged out Andrew Black in the Clubman quads to take the overall on the day with Matthew Gilchrist and Mithchell Adams respectively finishing third and fourth overall.

In the youth classes it was Corey O’Hare (auto’s), Adam Gibson (100cc) and Ross Dillon (250cc) took the victories in conditions they wouldn’t have been used too.

In the sidecar class, Neil Campbell and Ross Graham are used to having things run smoothly but it was far from that at Tinkerhill. In the opening race  they had issues which saw them push the sidecar over the line to get sixth. They had more issues in race two which saw them have a DNF.

It left the door open for Jonathan Wilson and Andrew Rowan who ended up having the perfect day going 1-1 in the tricky conditions to take the overall win – it’s nice to see a different winner once in a while.  Dean Faulkner and Curtis Beck edged out Ky and Cameron Addis for second overall.