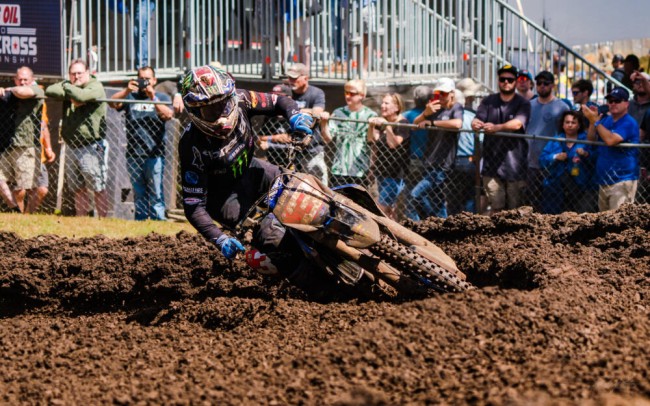 Jett Lawrence took the moto win and the 250 title holding off his brother Hunter and Jo Shimoda in an exciting moto that saw Shimoda and Hunter come together with the Japanese rider hitting the deck. That allowed Justin Cooper into third with Marvin Musquin running fourth for a long time eventually taking fifth.

Jo Shimoda passed early race leader Justin Cooper and then checked out admitting he was pissed off after Hunter’s aggressive pass in the first moto that left him on the ground. Jett Lawrence got himself into second, enough for the overall win to end his championship winning day on a high. Hunter Lawrence had a bad start and took sixth losing second in the championship to Shimoda.

Eli Tomac took a huge step to the 450 title by passing Chase Sexton for the lead late in a captivating and intense opening moto duel to take a crucial win giving him the option to take a second in the final moto to clinch the title. And, given the fact third place Craig was a minute behind and is also Tomac’s teammate, Sexton needs to hope for some bad luck in the final moto to win his first 450 title despite only being 4 points behind.

Tomac said: “It’s really hot today, I had to manage the beginning of the moto and had to fix my lines. That was a key moto.”

This was a stressful moto! Eli Tomac had a bad start just when he didn’t need it outside the top ten as Chase Sexton got away fourth with Craig and Anderson out front. Tomac worked his way inside the top ten but as Sexton searched for a way into third, a quick glance checking on Eli’s position meant Sexton hit a bump wrong and hit the deck getting up right behind his championship rival, with both outside the top five.

Sexton then crashed again while behind Tomac as Eli started making passes on his wayt o the front. As Tomac passed Craig then was on the back wheel of leader Anderson, Sextonw as now back into fourth with the front three in his sights until he went down for the third time in the moto setting a pass up on Craig for third. From there the title was all but over. Tomac passed Anderson for the lead and Sexton, to his credit, got up and charged back to second but it was Eli Tomac with a superb 1-1 under the most intense pressure to win his fourth 450 MX title.

Eli commented: “I just think of this whole seaosn, it’s been the most enjoyable year of my career. The compeition was unbelievable from Chase, he is the next 450 guy hands down. We pushed ourselves to the limit, and I think we raised the bar. This is a very enjoyable moment.”