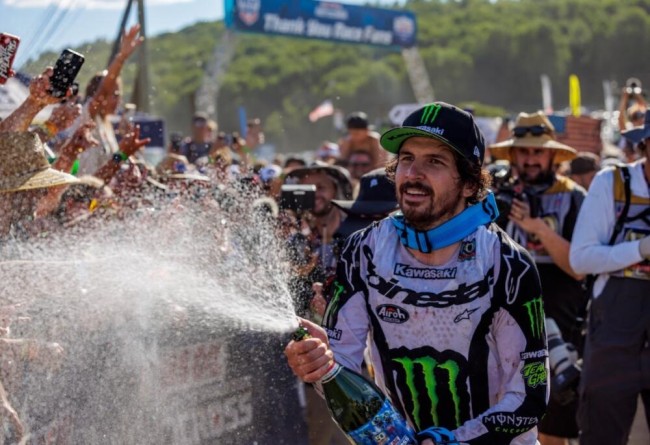 RJ Hampshire took the race one win as Justin Cooper and Hunter Lawrence went down early. Jett Lawrence took second with Shimoda besting Mosiman, the early race leader, after a long battle for third. Talented Spanish EMX2 rider, Guillem Farres, stunned America by taking a superb sixth on the Star Yamaha to underline just how much talent Europe is producing right now, even if the American media still choose not to follow the EMX or world championship too closely and had never even heard of Farres before! Farres is on the Spanish MXoN team too so will also be racing Red Bud – will he now stay for the final two AMA rounds as well?

Jo Shimoda took the second moto win in a really good ride that saw him pass holeshot man and Mr team USA, Justin Cooper, to do it. Cooper eventually finished fourth as Jett Lawrence came from a terrible start to third and almost run down RJ Hampshire for second but it was Hampshire with a 1-2 that took the overall win – if Jett had made the pass Shimoda would have won the overall! Hunter Lawrence had a couple of crashes that ruined his moto and his chances of the title as Guillem Farres came from outside the top ten into tenth and looked set to finish there until he crashed and dropped to 13th with three or for laps to go! But it was a still a strong day for the Spaniard who has really made a name for himself in the States with ninth overall.

Eli Tomac made some quick moves in decisive opening lap in race one – including a pivotal pass on Chase Sexton to take a huge win as Sexton, maybe flustered by Tomac’s early pass, crashed twice in the opening couple of laps to take seventh and lose a lot of points to race winner Tomac in a very tight championship. One turn after Sexton’s opening lap crash and Antonio Cairoli, who almost had the holshot but ran wide and was battling for a top five, was down as well, standing and waiting for whole pack to go by with a side plate battered on his KTM. Cairoli eventually finished 19th.

“What was important for me was to make moves early, admitted Eli on those crucial early laps before adding, “I rode way more like myself, I knew when I passed him (Sexton) it was key.”

That was a big championship ride under pressure from Tomac who delivered when he really had to for the title battle and maybe just turned the momentum in the series.

Chase Sexton took a crucial second moto win with his back against a wall after moto one and he even crashed again in race two! Ryan Dungey led early then Ken Roczen briefly before Jason Anderson took the lead with Sexton starting top five soon into the mix as Eli Tomac suffered a bad start at the back of the top ten.

Anderson then made an error allowing Sexton and Roczen by but then Sexton made a mistake and he dropped to third as Roczen and Anderson found themselves back at the front! Sexton quickly got himself back to the lead as Tomac got onto the back of the top six who were now all withing ten 6/7 seconds but once he passed Savtagy for fifth, Tomac just could not find his way past a stubborn Dungey with the pretty one lined track not helping matters.

Sexton took the win from overall winner Anderson whose 2-2 scores gave him his second outdoor win of the season with Roczen third, Dungey fourth and Tomac fifth – but Eli will head to the eleventh round with a one point lead over Sexton with two rounds to go!

Tomac said: “Bad start and not making the moves that’s what I needed to be better, the start everyone was riding good in front of but look at the positive I leave with 1 point up (on Sexton).”

Sexton said: “Today was not my day, even from pracrice I didn’t feel good, too many mistakes. You don’t win championships on your good days it’s your bad days your win them.”

Antonio Cairoli had another disaster moto, after gating around the top ten he dropped back to 20th and rode up to 16th – not the the day he was hoping for after qualifying in second!