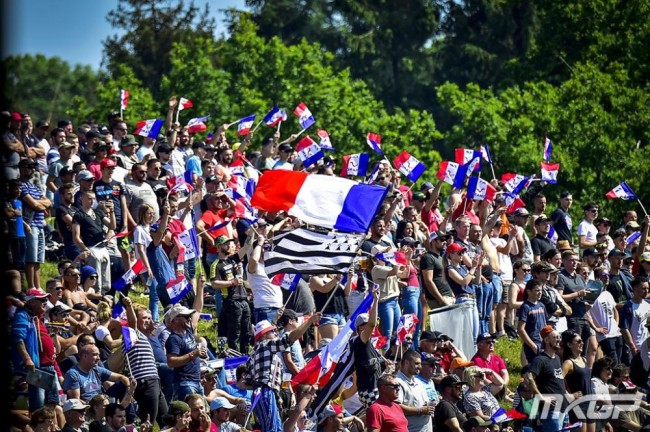 That was a wild GP on a sensationally technical track enveloped in a cacphony of noise from the vibrant French fans!

Jeremy Seewer took his first win of the year after his outspoken comments yesterday, but it came down to the last few laps and some wild, aggressive riding by the Swiss rider to get it done! Seewer ran down Jorge Prado in race one after both made the start from the outside gates but Prado clipped Lapucci on his way to the holeshot and caused a domino effect of a crash that took down Renaux, Jonass, Evans and Gajser!

Gajser came back to fifth with Renaux ninth but it was Seewer celebrating at the end of the moto in a great ride as Prado didn’t seem to be able to sustain his early race pace.

Race two and Prado again nailed the start, so did Seewer but he got shuffled back to fifth in the opening turns but kept at it and evenutally, when Coldenhoff ran down Prado for the lead, Seewer picked up his pace and set about passing Prado too until Gajser came into the mix after starting about tenth and passing amongst others, Renaux and Fernandes, then leaving them in his wake to catch the front three.

A desperate Seewer almost collided with Gajser as Tim attempted a pass that would have given Prado the overall win instead of Seewer. But the Swiss rider just about by the skin of his teeth held Gajser off and then the Slovenian fell allowing Seewer to make an aggressive move, with contact, on Prado to secure the overall win as Coldenhoff took the moto win in another superb day for Yamaha!

Gajser remounted to almost pass Prado but the Spaniard held on admitting after that his fitness isn’t quite where it needs to be yet after his dislocated shoulder. But it was still second overall for Prado between the Yamaha duo of Seewer and Coldenhoff.

Seewer said they found something with the bike on Saturday that helped his pace to bring home his first win of the year but with Renaux not having the day he wanted, Tim Gajser still stretched his lead to 73 in the championship depsite missing out on the podium for the third weekend in a row.

Tom Vialle took the MX2 overall win but it wasn’t a sure thing until the chequred flag unfurled in race two!

Vialle won race one despite a ton of pressure from Jago Geerts who made a decent start despite being on the outside. Geerts then made the necessary passes and began reeling in a five second gap to Vialle. When Geerts was on his back wheel, they duo simultaniously made mistakes in a split-lane left hander but it was Geerts that went down!

Geerts refused to give in and got up and again ran down Vialle again, but despite the pressure, Vialle made no mistakes to take a hard fought win with Simon Laegenfelder riding really well again to take third.

Race two was intense. After starting last when his bike wouldn’t start in race one and getting back to ninth, Thibault Benistant made amends in race two and took the lead from Vialle out of turn three as Geerts moved intp third and the trio then set a blistering pace up front as Everts made a mistake to drop from fourth to seventh a few laps in.

Bentistant continued to set the pace as Geerts made his move on Vialle, he just needed to pass his teammate now to win the overall as Vialle copied the Belgian’s lines and stayed in the hunt for the race win too! But with Geerts still searching for a way by his teammate and Vialle looking to re-pass Geerts, the Frenchman on the KTM made a mistake, going down in the ruts and ending his hopes of a second moto win – but not the overall victory!

Geerts still had to pass Benistant, it was big for the title and would give Yamaha the overall win but team orders didn’t come into play and Benistant rode flawless despite instense pressure from Geerts to take a huge win at home to get himself on the podium and secure a French overall winner with a 1-3 for Vialle beating Geerts 2-2 and extending Vialle’s lead by one point to 11.

Vialle didn’t know he had won the GP when he crossed the line but was soon ecstatic to find out he had won his home Grand Prix calling the fan support and noise “amazing,” with Benistant similarly complientary of some brilliantly passionate home support that saw the fans sing the national anthem as it played on the MX2 podium.