Renaux snipes back at critics and sends 2022 MXoN message 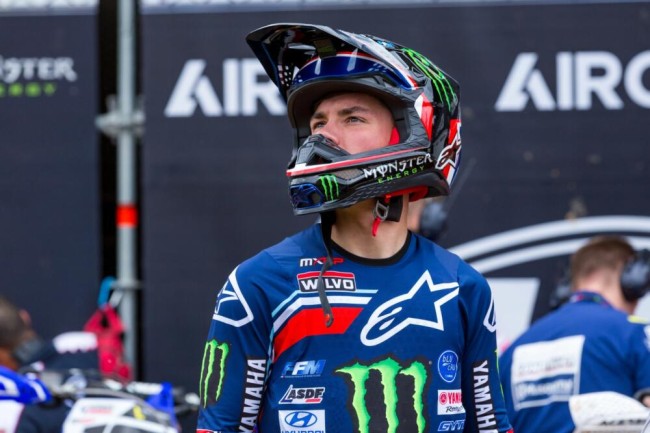 Maxime Renaux was bullish and confident after posting his fourth moto victory of his rookie MXGP season (the second highest total behind Tim Gajser) and his sixth podium finish in what was a swift return to MXGP after missing one Grand Prix and a month of action due to several fractured vertebrae.

The MX2 world champion was forced to interrupt his impressive maiden term on the YZ450F after a crash on the finish line jump in Germany led to the back injury but his comeback led to accusations that the physical damage was not as serious as he claimed.

“It is great to have so many surgeons in the paddock,” the 22-year-old deadpanned. “The doctors speak and I listen to them. I don’t really care what they [others] say. I know what I went through and I know what work I went through to get here.”

“Coming back after such an injury was not easy,” he added. “I wanted to return in Indonesia but it was not possible; the back still wasn’t stable enough. We made steps with the physio and I could not dream of a better GP [comeback]: a race win and 2nd on the podium. It’s amazing. I’m super-grateful because it could have been much worse and now we’ll keep the championship in mind until the end of the season.”

The Frenchman was steady for a 3-1 and the second step of the box behind teammate Jeremy Seewer at Loket. The Czech terrain was brutally rippled through the braking bumps.

“When I came here I didn’t feel so bad in training but, as we know, training is way-different to racing,” he described. “I have to honest I was feeling it today and on a track with such big bumps – I think we would all agree that the track was rougher than ever here and with such big edges – sitting on the seat was a tough one because the tail bone was also broken. It was not easy. I could just focus and ride my pace and I was surprised I could do this.”

Renaux’s bright starts helped but he still had to remain error-free to ward-off Seewer in the second moto.

“My legs were burning,” he grinned. “When you miss some GPs then it is like coming back to the lion’s cage. Those guys are really fighting for every inch. If you want to race, you want to be on the podium and you want to perform then you need such an amazing pace and for that you have to dig deep physically.”

#959 is 4th in the standings and just 42 points behind Seewer and the #2 plate; a slot he previously filled before his German mishap. Renaux’s progress in his maiden campaign is reminiscent of countryman Romain Febvre in 2015. Febvre crowned a magnificent title-winning year with his first representation for Team France at Ernee for the Motocross of Nations and now Renaux – although unlikely to ape Febvre’s MXGP championship feat – is hoping for his second country colours after appearing at the 2019 MXoN in Holland.

“Take me!” was his message for the French Federation and after he turned down the chance to ride in the MX2 class in 2021 as the edition at Mantova, Italy took place before the end of the season and Renaux was mired in his MX2 title pursuit. “I really want to be in the team,” he stated. “It is an amazing competition, an amazing event. I know they [the Federation] have a really big choice to do. I am rookie in the 450 class and I have strong guys next to me. I really believe I can have my place, I can do good and fight for my country. I’m 110% motivated for that race. It would be a total pleasure.”