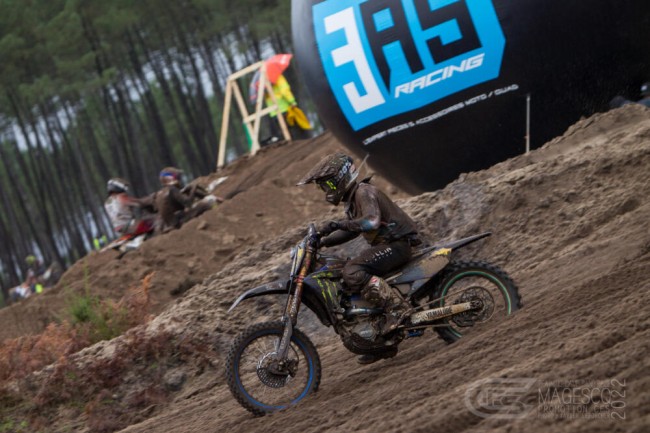 Todd Kellett won the Bud Beach Race of Magescq this Sunday by largely dominating all his opponents. The official Yamaha Dragon Tek pilot precedes his teammate Milko Potisek of more than 2 minutes at the end of the 2h30 of race. Yamaha signs a new double in the French Championship of Les Sables 3AS Racing, but in a different order from the first stage in Loon-Plage. The Belgian Cyril Genot, on his Honda SR, climbs again on the podium, only 20 seconds behind Potisek. Further back was his teammate Dutchman Lars Van Berkel and Belgian Yentel Martens.

The race took place on a very demanding circuit due to the rainy conditions of the last few days. The rain even came at times, complicating the task of the 320 starters. Alexis Collignon on KTM took the best start, while Chapelière and Hauquier crashed in the first turn. Cyril Genot quickly took the lead, followed by the two Yamaha riders. Kellett only had to wait a few laps before taking the lead, a position he would not relinquish until the end, increasing his lead lap after lap. Potisek had to fight hard to keep his second place against Genot, but he gave up his place as leader of the championship to the British rider. In the women’s race, Mathilde Denis, Honda SR, won again and strengthened her leadership position.

On Saturday, the quad race, shifted and shortened by one hour, saw the Norwegian Christopher Tveraen win for the first time in the championship. He was on the podium in Loon and took advantage of the bad performance of Randy Naveaux, who was not very comfortable on a wet track and only 10th. Tveraen is ahead of Jean-Marie Bernede and the Belgian Olivier Vandendijk. In the youth category, Tom Dukerts on GasGas won in Espoirs and Joey Nuques on Yamaha in Juniors. See you next weekend in Saint-Leger de Balson, near Bordeaux, for the Endurance des Lagunes, 3rd round of the French Championship of Sables 3AS Racing.