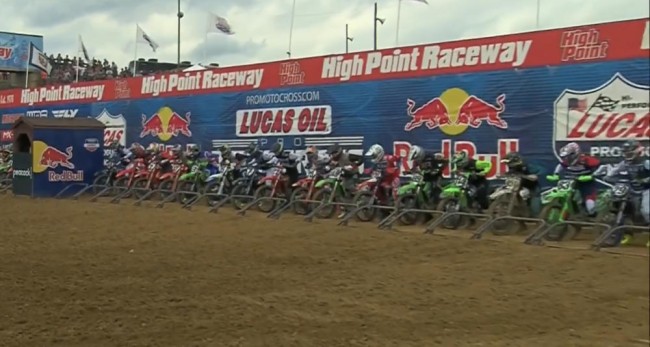 Dylan Ferrandis took the overall win with a 2-2 in an intense race at High Point! Kawasaki duo Adam Cianciarulo and Eli Tomac won the 450 motos but Roczen and Ferrandis put it all on the line especially in race two riding through the field with Ferrandis getting the edge.

Cianciarulo rode a great first moto to take the win even if he did crash just before the finish line into a fallen backmarker, getting up just in time to beat a charging Ferrandis who came through from the lower top ten positions after a bad start. Ken Roczen had been in contention for the lead but a crash took him out of running but when Seston fell he still made the podium.

Race two was intense. Plessinger holeshot but Cianciarulo and then a rejuvenated Eli Tomac came past. Ferrandis was just outside the top five but Roczen was back in 14th! From there Roczen rode amazing in the first ten minutes to get back onto the back wheel of Ferrandis as the Frenchman got himself into fourth then fought hard to keep Roczen behind him. Roczen made the pass but Ferrandis fought back as Tomac duelled with Cianciarulo for the lead a few seconds ahead simultaneously in a superb race.

Tomac finally got the lead leaving Cianciarulo behind but AC had to watch because Ferrandis was coming with Roczen on his tail as they duelled for the points lead! Such was the intensity of the battle Cianciarulo got passed by Ferrandis and Roczen at exactly the same time and then lost about five seconds in a lap!

The former GP men were setting such a pace that with about four laps to go Tomac had a ten second lead and two laps later it was down to five! Tomac picked it up to ensure the victory as Ferrandis fist-pumped his way over the line to take the overall win by a point over Cianciarulo just three seconds back Tomac at the end – with Roczen still glued to his rear wheel but not able to make the decisive pass!

Tomac said of his moto win: “I don’t know what was going on I was getting tight in the motos, struggling a little bit physically and not feelIng comfortable on the bike, it was a whole different world that time, I feel like I can keep it going,”

Ferrandis said: “What a race. It was a war. It was a big fight with Ken, he passed me and I passed him. We came back on Adam’s and passed him then Ken tried to pass me, it was gnarly. Every lap was crazy. Amazing getting the overall win, stoked to get back the red plate.”

Jalek Swoll took a very surprising overall victory at High Point in the 250 class with his previous best moto finish being a sixth at round two! In race one Hunter Lawrence holeshot but when Swoll went down the inside on the first lap Lawrence went wide but hit the rut at the wrong angle and fell over the berm and off the track!

Swoll took the lead but then got passed by teammate Hampshire who pulled away until his bike had an issue and forced the American to DNF after what looked to be a certain win. Swoll inherited the lead once more and kept his gap on second place Colt Nichols who was having his best ride of the outdoor season with Jett Lawrence consistent but relatively unspectacular in third.

Race two and Justin Cooper made amends for an average first moto that saw him go down and end up fifth two places behind title rival Lawrence. Cooper got the start and then pulled away to an easy win ten seconds ahead of Jett Lawrence who worked his way into second, after brother Hunter went down early again just after passing Jett to cap a disappointing day for Bunter who had a chance at the overall win without two early crashes. Jett admitted he played the long game and settled for the runner-up position after not being able to close the gap on Cooper.

But the story was Jalek Swoll who came out firing again in race two to take third place and show some great mental strength to bring home the overall win backing up his first moto win.

Swoll said: “This one goes out to Ricky, we had a guy in Husky pass away this week. To come out here and get a W for him and all these fans it means the world to my tongue was in the spokes – I was actually so tired! I dug deep, I knew I could do it, put in the hours and training for this. I can’t explain what I’m feeling.”