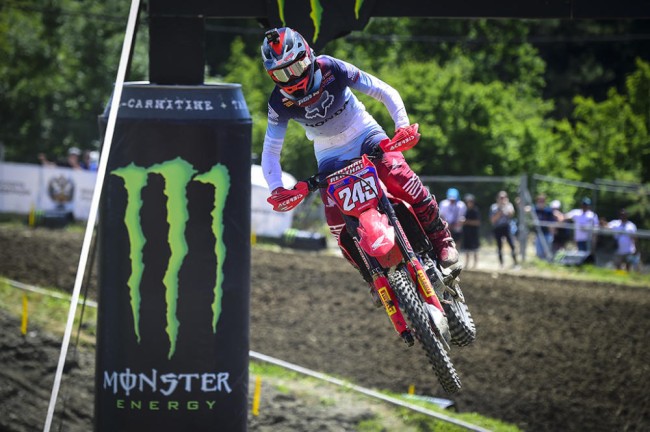 Tim Gajser took two blistering moto wins on a super slick Russian circuit to let everyone know just how determined he is to hold onto his world title!

In race one Gajser was aggressive on lap one, slamming into Cairoli before passing Prado for the lead coming out of the next turn and then eeking out a lead with a pace no-one could match especially when Prado slid out of second place and then Cairoli overbalanced in a rut, just about staying on the track but letting Febvre through for second.

Race two might have been the best ride of Gajser’s career. The Slovenian got tagged going into turn one, side saddled off the side off the track and came back on in 23rd place with Herlings, who suffered a bad start and rode to fourth in race one, out front with Cairoli behind him!

Cairoli had taken a strong third in race one and, when Herlings lost traction and slid out he found himself leading race two and on for the overall win! By this point Gajser was already up to ninth in a couple of laps and soon he was in fifth to make make it five world champions in the top five. Cairoli, from Jonass, Febvre, Herlings then Gajser in a super-talented race for victory!

But then Febvre rode into the back of Jonass, who stayed up but it left Febvre in the fence and out of contention for the overall as Herlings moved up to second with Gajser third.

But even Jeffrey Herlings couldn’t do anything about Gajser who passed down the inside of the Dutchman then slowly but surely reeled in Cairoli and pounced when Cairoli lost traction and failed to jump a double.

From there Gajser controlled the race but it was heartbreak for Cairoli who slid out on a finish line jump that had caught numerous riders out before him and the Italian was forced to take a harsh DNF after he looked certain for second overall at 35 years of age. A fuming Cairoli walked back to the pits as Herlings inherited second and some great damage limitation on a day when he didn’t risk it all for the win.

Febvre came back from fifteenth to sixth to take third overall with Lupino riding great to go 5-4 on his favoured hard-pack and a brilliant fourth overall as others made mistakes around the rock solid circuit.

Pauls Jonass qualified fifth only for his first race to end after a crash in turn one but he showed what he was capable of in race two with a third place and confirmation of his talent after a year being injured.

A delighted Gajser said: “I was enjoying so much today, the track was in really nice shap, the track was rough, I could sue some different line, I was 23rd I said to myself calm down, you have the speed, and started picking off the riders – I had a lot of fun!”

Tom Vialle started as he left off last season with some perfect riding to go 1-1 on the day and send a signal that he is once again the man to beat and that being the defending champ is no extra pressure for him.

“I have been working really hard over the winter, to win the first GP, I’m really happy, we have a new bike and it’s working amazing,” said Vialle who after holeshotting race one gated third in race two but passed Hofer and Fernandez instantly to take the lead and then clear off despite some aggressive riding by Fernandez who did everything to pass Vialle back but the Frenchman was having none of it!

Fernandez was just brilliant all day, he took a fine second in race won, his best ever GP result then refused to give in to Vialle at the beginning of race two. A crash demoted him to fourth but even then he didn’t settle getting back on the rear wheel of Hofer and putting an aggressive move on the KTM rider on the final lap that left Hofer on the deck and Fernandez third for second overall- what a ride by the 114 Honda rider.

Pole man Mathys Boisrame was strong in both motos, he didn’t quite get the start in race one to rode consistent for fifth before working hard all race long to make the move on Hofer to take second in race two. Boisrame is looking good this season and didn’t look to be taking too many chances.

Hofer rode very well in both motos despite that late race crash after his injury last season for fifth overall but it was a case of what could have been for Maxime Renaux who showed brilliant pace but two bad starts killed his podium chances despite two hard riders through the field but still took sixth overall behind a consistent Roan a an de Moosdijk who has himself nicely positioned in the series after a third and fifth in the two motos.

Jago Geerts had a tough day with his knee qualifying 21st then going down with Wilson Todd in race one after being tagged by Simon Laengenfelder. He got back to 17th but race two was much better with a top ten start and sixth place for 12th overall with 19 valuable championship points in the bag in what couldn’t have been a comfortable opening GP for last year’s runner up.