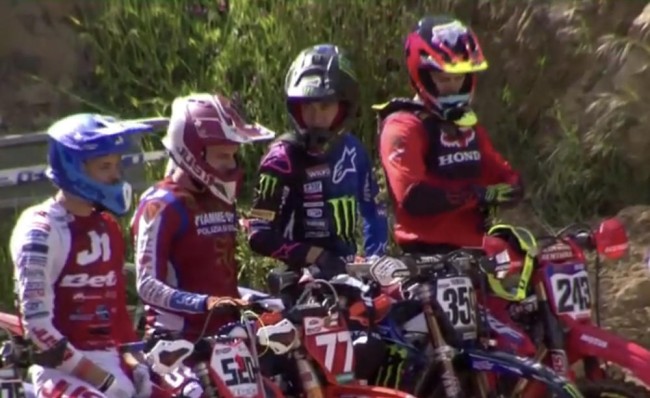 On a beautiful Montevarchi circuit that had a bit of everything, reigning MXGP world champion, Tim Gajser, won both races of round three of the Italian championship unchallenged and even had the energy to post his fastest lap of the race in the final lap of race two – saying that’s what he likes it do in practice! Indeed, so dominant was Gajser that it was like a glorified practice session with the Slovenian unsurprisingly admitting he enjoyed his days racing.

It was a mixed day however for Yamaha’s Glenn Coldenhoff who just about held onto third in race one from a flying David Philippaerts who turned back the clock to show what a great rider he was – and can still be! Philippaerts fist pumped emphatically over the finish line justifiably chuffed with running with factory Yamaha’s big winter signing.

Coldenhoff said he had a better feeling in race two that saw him hold off Alex Lupino to take second but Lupino was impressive all day on the Marchetti KTM, catching and passing Coldenhoff in race one to go 2-3 on the day.

Philippaerts was fourth again in race two but didn’t get the start he needed to run with Lupino or Coldenhoff and to round off a great days for Italy’s former world champions, Alessi Chiodi went top ten twice – nearly 30 years since his 125 GP debut as Italy’s next great hope! From Greg Albertyn to Tim Gajser, Chiodi has raced Honda world champions three decades apart!

In MX2 Simon Laengenfelder took the overall going 1-2 and announcing his return to action in style after injury ended what was an impressive season last year. The young German says he has had a brilliant winter (assisted by Joel Smets) and feels superb on the factory Gas Gas machine – it certainly shows! Laengenfelder could be one to watch in the 2022 world championship.

Fantic star, Nicholas Lapucci, was leading race one with Laengenfelder on his tail but a heavy crash ended his hopes of overall victory. He did however come back to win race two in style – even if he was kept honest by Laengenfelder on the Gas Gas. It was a Gas Gas clean sweep on the podium with Andrea Adamo and Kevin Horgmo second and third overall with strong rides from the duo. Isak Gifting however had a frustrating day coming from the back in race one then crashing out of third in race two just when he was in the wheel tracks of teammate Laengenfelder and Lapucci early on.

René Hofer had a consistent if unspectacular comeback from his shoulder injury sustained last year with sixth overall but it is a good starting point for the Austrian to find his race pace again before the world championship begins.