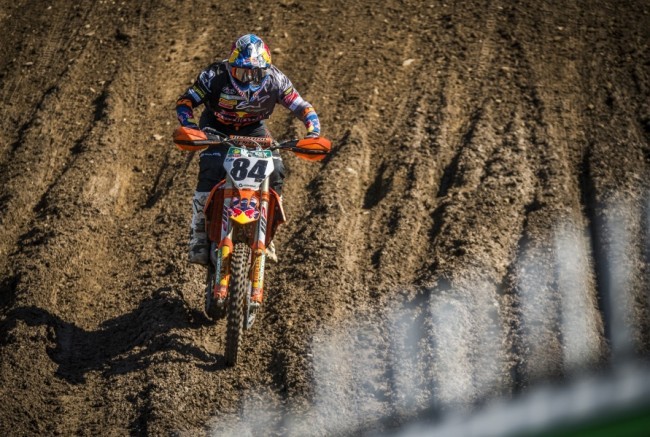 Jeffrey Herlings took the overall win at Ernee but he certainly didn’t get everything his own way! A bad start in race one meant the Dutchman had to work his way through the entire top ten of a strong field to get to second but he couldn’t quite get close enough to Jeremy Seewer who rode a fantastic race to take the win leading from gate to flag despite Herlings, Febvre and Coldenhoff getting close at the end.

Febvre, who fell and stalled in race one and still took third, chased Herlings home and had Herlings as the carrot again in race two when the Dutchman this time took the holeshot and tried to check out. After initially pulling away, Febvre then found his groove and closed the gap right in, stalking Herlings at the end of the race and putting the pressure on but he just couldn’t find a spot on the rutted course to really make a move on Herlings, however he showed his was ready for the world championship to start!

Ivo Monticelli rode very well battling both Coldenhoff and Seewer in race two with Seewer eventually getting the better of both to take third on a very strong day for the Yamaha man. It was a good performance too from Glenn Coldenhoff, fast in both races and looking much more competitive in the hard-pack than he did in Italy a few weeks ago.

Ben Watson found himself battling Jeffrey Herlings again at Ernee, just like Lyng but this time it was for fifth place a few minutes into the opening moto, Watson couldn’t hold Herlings off but he did show good pace to take fifth although a bad start meant eighth in race two. It was a tougher day for the Ice One Husqvarna squad with Thomas Kjer Olsen back in tenth and Arminas Jasikonis 13th in a very competitive field.

In MX2 Tom Vialle reigned supreme. The defending world champ looked every inch the best 250 rider in the world as he dominated both motos in style. He sat behind his teammate and early race leader, René Hofer, briefly in race one before making the pass and controlling the race from there. Race two and it was Vialle with the holeshot again, this time he had Thibault Benistant pressuring him for a while at the beginning of the race but the new Kemea Yamaha rider couldn’t stay with Vialle and Red Bull KTM rider ran off into the distance and made it look easy with his technical style, standing up late into the turns and playing with the bumps.

But Benistant had a strong day and his second place in both showed a glimpse of what he can do this season. Mathys Boisrame, who was fast all day took third overall, with only a crash in race one blighting his copybook. Simon Langenfelder rode well again, stalking Boisrame the whole second moto to underline his potential this season with René Hofer also in good form going 4-5 on the day. However it wasn’t a great day for Jago Geerts who suffered a bad start in race one before coming back to fifth but had a mediocre start then a DNF in race two and never saw Vialle in either race.