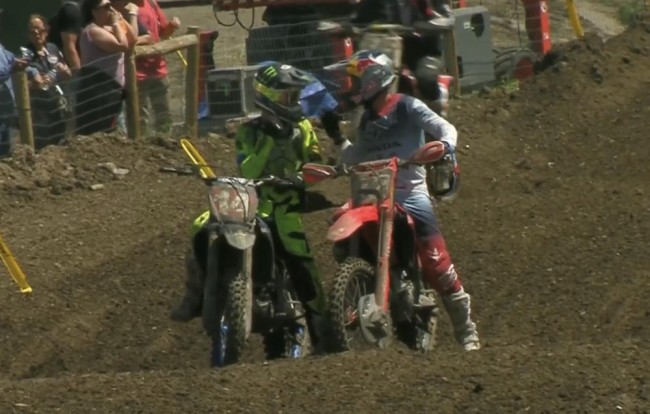 Ken Roczen and Dylan Ferrandis put on a riding clinic for the rest of the 450 field at Colorado with the fast, flowing and sometimes slick circuit playing right into their wheelhouse with their throttle control and imaginative minds paying dividends around the undulating circuit.

Race one was a cracker with a rapid Roczen getting his way into the lead quickly on lap one with Cianciarulo and Ferrandis second and third. But Cianciarulo wasn’t letting Roczen get away, divebombing the German with Roczen almost forced right off the track to avoid going down – and these guys are friends! Ferrandis then set about passing Roczen eventually making the move and then putting a pass on Cianciarulo for the lead after things got very close between the pair.

Roczen showed his fitness isn’t a problem when he made a pass back on AC late in the race and started chasing down Ferrandis. The former GP men then set a pace even Cianciarulo couldn’t match with Roczen spooking Ferrandis on a jump that left the Frenchman off the track allowing Roczen back into the lead. Ferrandis just couldn’t quite get back in terms with Roczen but he subsequently revealed he had no rear brake towards the end of the race.

In race two Roczen was simply electric on the first lap passing holeshot man Webb to take the lead and then he just cleared off, stretching a gap over 15 seconds and was simply in a class of his own. Although Dylan Ferrandis might disagree! The Frenchman said he got sandwiched between the two factory Honda riders out of the gate leaving him at the back of the top ten as Roczen disappeared out front but Ferrandis kept his composure and passed all the heavy hitters in the top ten including a fast Justin Barcia to take second off the Gas Gascrider with two laps to go and salvage some crucial points in what looks like a battle with Roczen for the title two rounds in. Roczen now has a one point lead over Ferrandis with Plessinger 16 back in third.

An elated Roczen said: “What a perfect day, I can’t believe it. It seems like I’m slowly starting to be my old self.”

It was another bad day for Cooper Webb who, despite good starts, still only managed eighth overall with Eli Tomac, also never on the pace back in tenth. Max Anstie and Dean Wilson were never a factor in the top ten with the British riders 13th and 14th overall and still searching for top ten pace.

Consistency saw Justin Cooper take the 250 overall win at Colorado for the second year in a row and maintain his title challenge but the drama centred around his teammate Jeremy Martin! Martin won the opening moto in style after passing teammate Cooper for the lead and consequently took the points lead with Jett Lawrence back in fourth and unable to go with the front three despite being with them at the end of the first lap.

But race two was a disaster for Martin who suffered a bad start then went down a couple of laps later just when he had reached the top ten. Martin took a while to get up and ultimately DNF’d favouring his hand to let Jett take sole possession of the points lead with a brilliant second moto win after he had a pretty aggressive battle with Justin Cooper for the lead!

Once Jett asserted himself he pulled away to a superb win and has established himself as the man to beat in the class at just 17 years old with a ten point lead in the championship over Justin Cooper. Third overall was Hunter Lawrence with 5-3 scores despite a crash in race two on a superb day for the Aussie brothers.