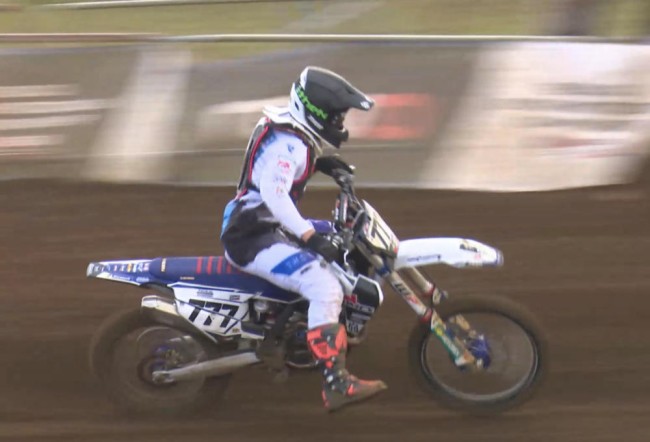 Evgeny Bobryshev came out on top in a brilliant battle of the British champions at the opening MX1 round of the year at a choppy and rutted Culham!

The Russian on the PAR Home Husqvarna held off a determined Dylan Walsh to win race one despite some arm pump with Searle and Simpson third and fourth but not on the pace of the front two. Walsh and Searle involved in an entertains duel for the first two lap but Searle couldn’t go with Walsh as he went after Bobryshev only for the Russian to up his pace at the end to secure the win.

Race two and all the main players were at the front. Walsh holeshot from Bobryshev, Simpson, Sterry, Banks-Browne and Searle – six British champions all running nose to tail vying for win! Bobryshev and Walsh immediately went to battle with the Russian and the Kiwi passing each other back and forth early as Simpson joined the pair of them only to go down in the ruts entering a sweeping right handed ending his hopes of a win.

Bobryshev eventually took control and as Walsh slowly dropped back, it was Searle who started to find his groove but he still had Sterry and EBB on his tail. Searle kept his cool and after numerous attempts found a way by Walsh with two laps to go to take second but no-one could stop the brilliant Bobryshev from a double win and the red plate after a perfect day at Culham.

Conrad Mewse took the overall MX2 win after a dominating opening moto victory showing some blistering pace on track but that was unfortunately overshadowed by a red-flag and restart after Mewse’ Hitachi KTM teammate Bas Vaessen unfortunately went down hard on lap one and needed medical attention.

Race two didn’t quite go as easily for the rapid Mewse. The Englishman had to work his way through the pack as Wilson Todd, third in race one, got the lead and pulled out a decent gap.

Once into second Mewse set his sights on the race leader and eventually pulled him in with a four laps to go. A pass attempt on the penultimate lap didn’t work and then a backmarker got in the way and prevented Mewse jumping a step-down giving Todd the gap he needed to take a hard-earned race win on the Bike-It Dixon Kawasaki.

Johan Adamson rode fantastic all day with two great starts for third overall (2-4) with Taylor Hammal also in great form, catching teammate Todd in race one but was unable to make the pass for third. Hammal rode well once again to get third in race two but still missed the podium with fourth overall.