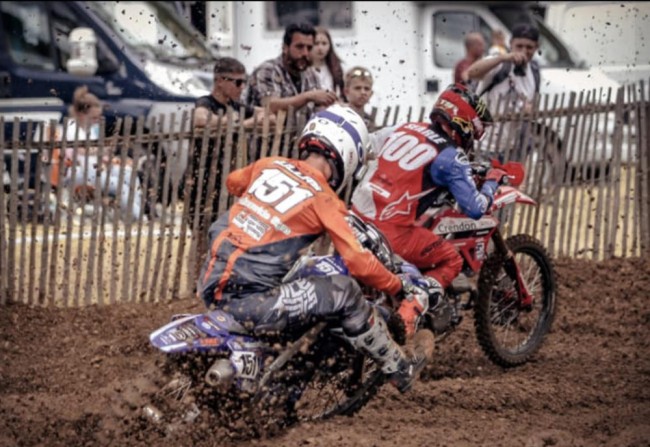 What a day of racing at Foxhill!

Harri Kullas took his second overall win in a row to put himself and his Cabscreens Yamaha very much in title contention with Tommy Searle who held onto the red plate with another consistent day – but still no moto wins!

Race one and Kullas rode fantastic to hold off a very determined Dylan Walsh with Searle unable to go with the pace of the leaders and ended up focusing on holding off a very fast Josh Gilbert who was seriously impressive in his first 450 race especially after coming back from knee injury to do it on the PAR Homes Husqvarna!

Up front and Walsh was looking to make the move but suddenly he disappeared from the action and then slowly rode off the track and back to the pits favouring his left leg in a big blow to Walsh’s title hopes and potentially his appearance at Matterley Basin next weekend. Walsh did not race moto two with the Revo Kawasaki star away to hospital to get an X-Ray. That drama left Kullas out front and cruising past the chequered flag with Searle second and a delighted Gilbert in third ahead of teammate Bobryshev.

In race two Kullas was out front early again with Searle and Bobryshev locked in combat for second position with Searle finally getting the best of the Russian but it wasn’t over for Bobby, who is still dealing with the afetreffects of that broken shoulder blade, with Shaun Simpson in determined mood behind him.

Simpson had a disastrous race one crashing over the fence at the bottom of the hill, losing his peak, and his seat! He kept going to take 12th but was intent on making up for that mistake in race two! First, he got by Bobbyshrev, then he made a block pass on Searle before pulling away from his long-time rival and reeling in the five second gap to Kullas! Even Kullas couldn’t stop the Scot this time with Simpson making a nice pass for the lead, Kullas stayed close until the end with Searle suddenly finding oace and catching the pair of them in the final five minutes of the race but Simpson stayed strong on the final lap to take a much needed Bain over Kullas and Searle.

Bobryshev stayed fourth with Gilbert coming through to sixth after a not so great start in race two. Stuart Edmonds had another great day starting in the top five in face one eventually taking seventh and then eleventh in race two behind fellow Irish rider Glenn McCormick who is having an impressive rookie year in the 450 divisions on the Chambers KTM. James Dunn showed a glimpse of his potential in race two running top five for a while and eventually coming home seventh to remind everyone of his natural talent on a bike.

In MX2 Conrad Mewse was back to his best and in a class of his own. The Hitachi fuelled by Milwaukee KTM rider passed Steven Clarke and race leader Wilson Todd in race one and never looked back to confirm he is feeling better after illness and in prime form for his home GP next weekend!

Mewse was straight into the lead in race two and checking out when one corner caused a world of problem! A deep rut appeared to be de-railing chains and first to hit trouble out of the contenders was Taylor Hammal, then fifth placed Ike Carter – and then a couple of laps later Conrad Mewse was struck by the same affliction! But while Hammal and Carter could not get going again Mewse was seemingly able to fix the chain back on the sprocket and get going but he was out of the points by then and Wilson Todd was cruising out front!

Then, unbelievably. with a couple of laps to go and the win in the bag, Todd fell foul of the same rut but unlike Mewse he couldn’t get going again and lost the win! Todd was forced to sit and watch the rest of the race with teammate Hammal and Carter on the side of the track in some unbelievable scenes.

This left John Adamson leading and set for his first win with two to go but on the last lap Steven Clarke pulled out all the stops, caught Adamson then made the move on the penultimate turn. By the last turn they were still side by side but Adamson then wheelied out of the turn and fell right at the line leaving Clarke punching the air in delight at the overall win in a quite sensational and perplexing race! It was made even more dramatic since live timing had broken and even the trackside commentators didn’t know if Adamson crossed the line before he crashed or if Clarke got the moto win. Clarke was finally declared the winner after Adamson’s heartbreaking mishap! Conrad Mewse saved a podium with a great ride back to seventh.

Liam Everts, who fell twice while looking good for a potential top five in race one, rode great in race two to take third in the moto not far off the pace of the duelling leaders Clarke and Adamson in the last couple of laps and it meant fourth overall for Liam I’m what was a great day for the family with Stefan back on the bike doing a lap of honour for the fans, many of whom would have witnessed his GP wins at the chalky, hillside circuit in the 90s.