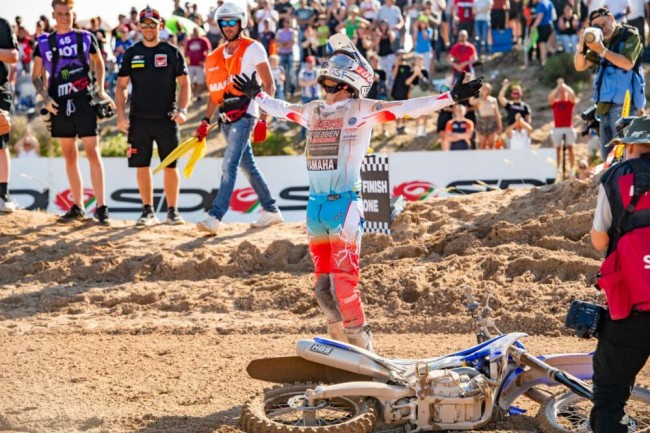 The emotion showed what it meant. On a small island in Italy, a long way from South Africa, Calvin Vlaanderen accomplished a lifelong dream and it felt good – despite the 30 degree heat!

Boarding a plane from South Africa all those years ago with a talent and a dream, Vlaanderen kept believing through all the injuries and even losing a coveted factory ride when he moved to MXGP despite success in MX2. Finally, it has all paid off, Calvin Vlaanderen is a Grand Prix winner in the toughest motorcycle class in the world. (said in Jeremy Clarkson voice).

And what a way to do it! Three out of three wins with a new-found self belief resulting in a simply stunning display of dominance against the best in the world on maybe the toughest track on the planet. Smooth and flowing, Vlaanderen made the track easy, with even former world champ, Ben Townley, beguiled and captivated by his speed across the tapestry of bumps. This was the race of his life and a day he will never forget. He is the first rider from South Africa to win a Grand Prix in the premier class since one of the greats of the 90s, three-time world champion Greg Albertyn won in 94 on a factory Suzuki.

Credit too to Gebben Yamaha, privateer power got the job done and the satisfaction after their hard work alongside Calvin must feel so gratifying. They believed in him and have delivered a package that has given Calvin the tools to deliver a GP win at the highest level. It doesn’t get any better than that and for Yamaha to get four of the top five overall is a great advert for their 450 machine – and thats alongside a 450 supercross title, AMA 450 outdoor title and Jago Geerts currently leading the 250 world championship – what a time to be part of Blu Cru!

Talking of MX2, what a day of racing! Jago Geerts and Tom Vialle put on a sand riding clinic for the rest of the world to enjoy. In the midst of an intense title battle, these two are finding more speed and amazing composure with some extra intensity to go along with it, that is bringing their pace to a new level. This was riding perfection by both and the world should recognize just how amazing Geerts and Vialle are on a dirt bike. They are the best two 250 riders on the planet right now, and if anyone disagrees, come to the MX2 world championship and prove otherwise over a full season.

Jago Geerts composure this year is so much improved and he just refuses to give in at any point in any race and Tom Vialle now looks to have the new KTM sorted to his liking and seems to have upped his raw pace to the level of Geerts. Another reason that their battles are so good to watch is that they both also have amazing technique and style on a bike blending aggression and intensity with perfect form, evidenced again by the bike control and line choices in Riola. This championship might just end up on a level similar to the Tortelli/Everts duel in 98. It’s that good right now!

Podcast: Jonathan McCready and Andy McKinstry dissect the shock win by an exceptional Calvin Vlaanderen as well as a blistering battle for the win in MX2 between Tom Vialle and Jago Geerts.